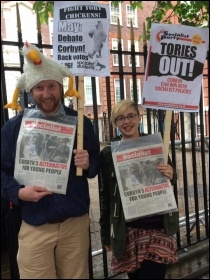 Why so chicken Theresa May? photo Claire Laker-Mansfield   (Click to enlarge)

Socialist Students called out the Tories and Theresa May for being chickens with a protest outside Conservative Central HQ in London on 17 May.

May is refusing to debate Jeremy Corbyn in the snap general election she has called. Quite frankly it shows how unconfident the Tories are to go up against anti-austerity politics.

Not only are the Tories too chicken to debate on TV against Corbyn, but they have also once again refused calls to reduce the voting age to 16. Imagine being that scared of 16 and 17-year-olds!

There is a growing campaign of school and college students calling for votes at 16 and they also held a protest on 20 May in Trafalgar Square.