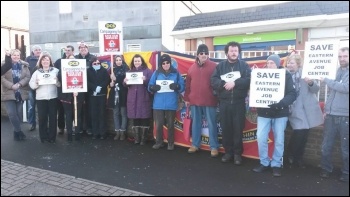 Government workers sometimes get a hard time because they have to carry out Tory policies that hurt benefit claimants and welfare recipients.

But in Sheffield, the staff at the Eastern Avenue Jobcentre who are PCS civil servants' union members, are taking strike action, not just to save their own jobs, but to keep a local office open and to continue providing a service in one of the poorest areas of the city.

If this office closes, then thousands of service users will face the hassle, time and expense of travelling into the city centre with increased risk of benefit sanctions for lateness or non-attendance.

48 PCS members voted 92% in favour of strike action with turnouts exceeding the new legal threshold required by the Tories' latest anti-trade union laws. The first one-day strike will be on 2 June. And at a very well attended dinnertime car park meeting, members voted for a further one-week strike from 12 June.

This industrial action follows a sustained campaign carried out by the office reps and members and the Sheffield PCS DWP branch, linking up with Unite Community, and with the support of the Socialist Party, Disabled People Against Cuts, and other labour and trade union activists.

The campaign also has the full support of the PCS DWP group executive.

Since the proposed closure announcement in January, the campaign has organised several protests outside the office, a film showing of 'I, Daniel Blake' in the local community, sent reps to the PCS lobby of parliament, and got supportive motions carried at Sheffield trade union council and Sheffield city council.