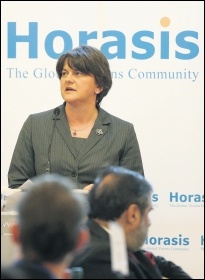 For a real cross-community socialist alternative

Theresa May's humiliating failure to win a parliamentary majority has placed the Democratic Unionist Party (DUP) at the centre of UK politics, with the party set to prop up the Tories through a 'confidence and supply' agreement.

Many in Britain and Northern Ireland are horrified that a party with such homophobic and sexist positions will have influence at the heart of government.

However, while the DUP leadership are reactionaries, they are also pragmatists. They will not push to roll back LGBT and women's rights in Britain, or undermine them further in Northern Ireland, knowing the public would not tolerate it and the Tories could not deliver it. Nor would it be supported by their voters.

The DUP's support is primarily based upon being seen as the strongest voice for the Union, not its fundamentalist agenda. For example, a majority of DUP voters support same-sex marriage; 73% support some reform of our archaic abortion laws, while 49% support full decriminalisation!

The DUP is not alone in holding a backward position on the issue of reproductive rights - while a majority in both communities support the extension of the 1967 Abortion Act to Northern Ireland, this is not supported by any of the main parties.

Relying on the DUP is obviously far from perfect for the Tories but, given the blow they have just been dealt and with Labour rising in the polls, they will not want a fresh election any time soon.

For its part, the DUP does not want to see a Corbyn-led government - both because they oppose his left policies and because of his long-standing connection with Sinn Féin - and will have little interest in rocking the boat.

It will likely keep its demands relatively limited: funding for some pet infrastructure projects and for security, as well as other monies so they can claim to have 'delivered for Northern Ireland'; guarantees there will be no hard border post-Brexit, as ironic as that may seem; and verbal commitments on issues like the extension of the Military Covenant (a government promise to look after former members of the armed forces and their families) to Northern Ireland.

However, it is an inherently unstable arrangement. The DUP can face opposition from its working class base if it is seen to facilitate ongoing austerity in Northern Ireland and can be pressured to make other demands the Tories simply cannot concede to. For example, elements within the Orange Order are already calling for them to push for the abolition of the Parades Commission.

Countless issues and pressures can bring this arrangement crashing down, not least organised working class opposition.

In response to the DUP's now central role, there have been renewed calls from some quarters for Sinn Féin to abandon its abstentionist position and take its seats in Westminster, believing this would strengthen the 'progressive' forces in parliament and, potentially, Jeremy Corbyn.

Sinn Féin is not a progressive party, but the other side of the sectarian coin. Like the DUP, its support is derived from being seen as the most strident voice for 'its community'. Sinn Féin too would use its seats in the House of Commons to inject its divisive, sectarian and nationalist agenda, not to fight for a left government.

Despite its rhetoric, Sinn Féin has ideologically embraced neoliberalism. It has dutifully implemented cuts, committed itself to the project of shrinking the public sector in Northern Ireland and campaigned alongside the DUP for a cut in corporation tax. It is also, as the late Martin McGuinness put it, an 'anti-abortion party'.

Negotiations to re-establish the Stormont institutions are set to recommence, with a formal deadline of 29 June before fresh Assembly elections have to be called, although this is likely to be swept aside.

The DUP's new role at a UK level has the potential to further complicate matters. Sinn Féin and its leader Michelle O'Neill will question more vocally whether the British government can now act as a neutral arbiter.

Given her strengthened mandate, Arlene Foster will not be standing aside as DUP leader until after the RHI ('cash for ash' ministerial scandal) inquiry, as Sinn Féin had demanded.

In Britain, the prospect of a left-wing government is now firmly on the agenda in the near future. Meanwhile, sectarianism has strengthened its hold in Northern Ireland.

The high turnout here, reflected a weary sense of obligation to vote against 'the other side', not enthusiasm. All eyes were turned to the battle between Corbyn and May, with socialist ideas being discussed in a way not seen in a generation.

Unfortunately, there was no genuinely cross-community vehicle for this hope and support to find expression at the polls in Northern Ireland. Fresh Assembly and Westminster elections are possible within a matter of months and local elections are scheduled for early 2019.

The Labour Party in Northern Ireland has swelled and shifted to the left under Corbyn's leadership but is still barred from standing official candidates. In the event of fresh elections, Labour activists here must make a decisive stand, even if this means defying the London leadership and acting independently. The alternative is to surrender the field to the forces of sectarian reaction.

The Socialist Party worked with others to launch Labour Alternative ahead of last year's Assembly election, to put the idea of building a mass, cross-community left party on the agenda.

The labour movement is the only force which has the potential to turn the tide away from sectarian division. In the coming weeks, we will aim to bring together all those who recognise that 'labour can't wait', to put forward the strongest possible anti-sectarian voice for those looking towards Corbyn's socialist policies in future elections.