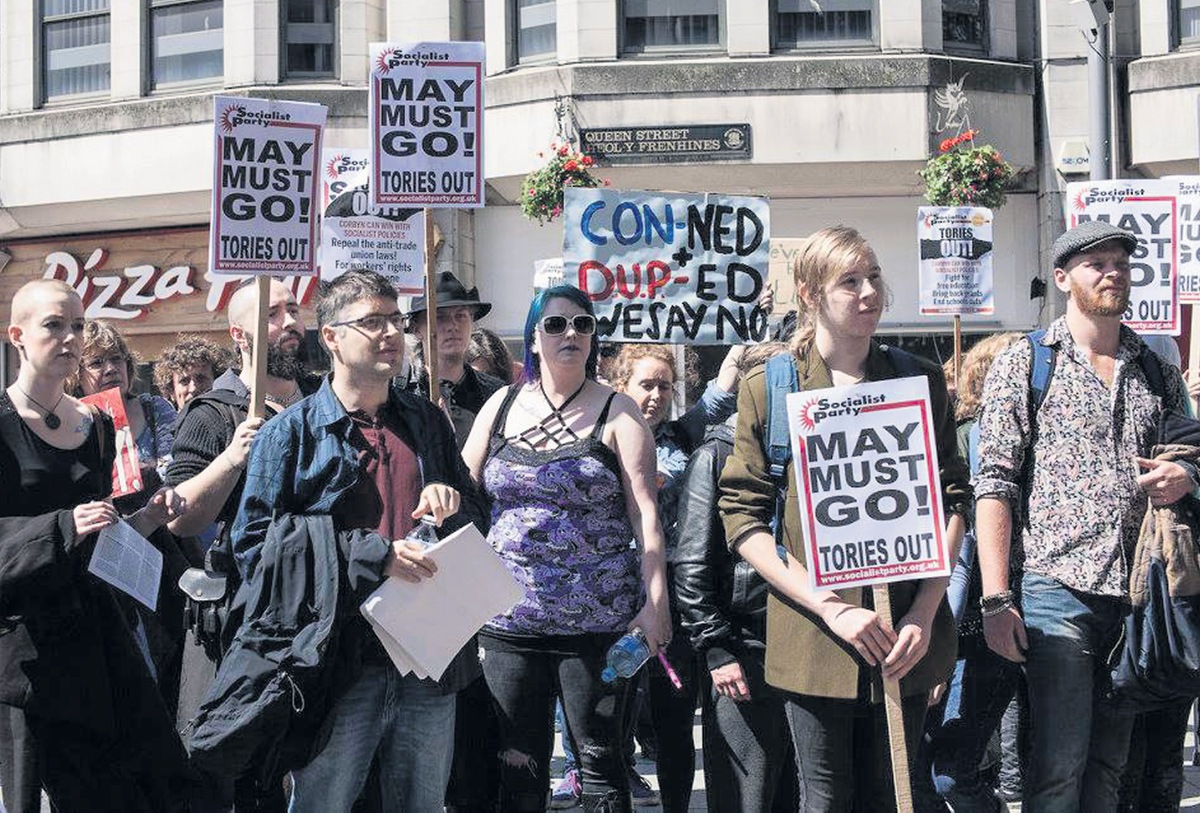 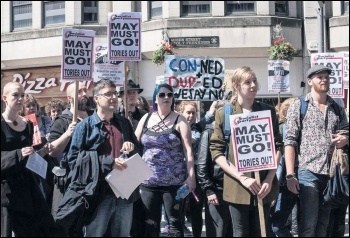 Demonstrating against the DUP-backed Tory minority government in Cardiff, 10.6.17, photo by Taz Winkel-Opleier   (Click to enlarge: opens in new window)

There were a lot of red faces among the political establishment in Wales on 9 June.

Before the election there was a universal prediction that Jeremy Corbyn would deliver a win for the Tories in Wales – from pundits, journalists, pollsters and even the chair of Welsh Labour.

But they were all confounded by an even bigger swing to Labour than in Britain as a whole – gaining 6% more than the Tories, compared to 4% across the UK. The Tories lost three seats to Labour, ending up with just eight in Wales to Labour’s 28.

Considering the Welsh Labour leaders entered the election expecting the worse it would be a bit rich for them to claim the credit for one of the biggest swings to Labour since 1945… but they are.

And the usual pundits – who had predicted a meltdown for Labour under Corbyn’s leadership – are backing them up.

Cardiff politics professor Roger Scully had predicted the Tories would win the most seats in Wales. He wrote in the Spectator: “Theresa May might just be the person who brings to an end the near-century long era of Red Wales.”

He wrote after the election: “The result in Wales almost defies belief” – and then declared in an interview it was a “personal victory for Carwyn Jones”! Welsh Labour is trying to seize the victory from Corbyn.

The Welsh Labour leaders tried to run a separate campaign in Wales. The general election campaign launch even referred to Welsh government policies promising to “continue to give the NHS the funds it needed” – meaning more NHS cuts.

They refused to mention Jeremy Corbyn at all. But on the streets it was Corbyn that the election was all about.

Initially the unanswered propaganda against Corbyn in the media had an effect. But as soon as Corbyn’s policies were announced in the manifesto, the mood changed – and the more Corbyn was seen in the campaign, the more the swing to Labour intensified.

The general election was preceded five weeks before by the Welsh council elections when Welsh Labour defended its leadership in a majority of councils.

The Welsh Labour government and councils have faithfully implemented the cuts to services demanded by the Tory government and Westminster. Although those results were not as bad for Labour as some pundits like Scully had predicted, Labour did lose dozens of council seats.

It was Corbyn who turned the result around for Labour in Wales. This was illustrated by the fact that on 8 June, the very same election day that Labour made big gains in Wales in the parliamentary election, it lost control of Merthyr council to independents in a delayed local election.

Plaid Cymru gained one MP’s seat from the Lib Dems, equalling its record of four seats in the UK parliament. But Plaid’s overall vote was down as working class voters in the valleys and the north returned to Labour.

Plaid had attacked Corbyn’s manifesto in the election. Their party political broadcast said “Labour are making promises even though they know they will never be able to keep them – next they’ll be promising free kittens to every voter”!

The Lib Dems were wiped out, losing their last seat. The party of Welsh prime minister Lloyd George has no MP in Wales for the first time since the ’50s – the 1850s.