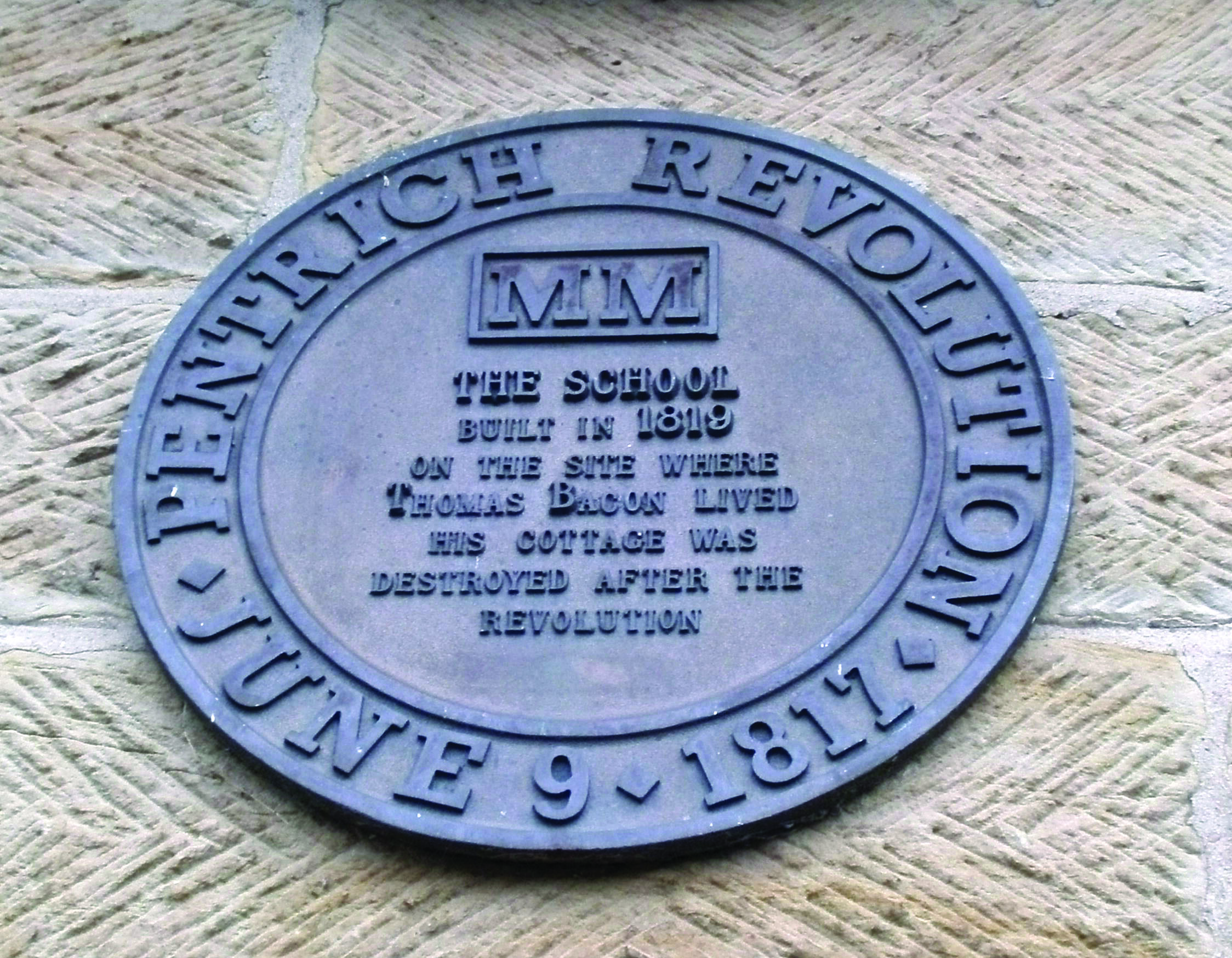 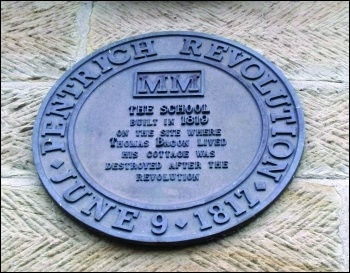 The pretty Derbyshire village of Pentrich shows few signs today of its industrial past. But on 9 June 1817 over 200 armed workers marched from there towards Nottingham. Miners, quarrymen, ironworkers, knitters, farm labourers – they believed they were part of a national uprising to overthrow the government, win universal votes and install a provisional government that would feed all.

Workers in 1817 had many reasons to rebel. Discharged soldiers and sailors roamed the country, penniless and homeless. The British ruling class had used them while threatened by the French revolution and Napoleon’s armies. Once no longer needed, ex-servicemen were treated abominably.

Mechanisation of agriculture and common land enclosure was turning farm workers into day labourers – paid if there was work, starving if there wasn’t – the zero-hour contracts of the time.

Machines in factories were displacing knitting frames in workers’ homes. Overproduction slashed pay. The Framework Knitters Union, formed in 1812, won minimum wage rates in 1814 and campaigned against ‘truck’ payment – workers paid with goods sold (for a profit) by their employer. Three union leaders were then sentenced to a month’s hard labour.

The Luddite movement smashed factory knitting frames during 1810-16, including in Derbyshire villages around Pentrich. 3,000 attended the funeral of an executed Nottingham Luddite. Six more were executed and three transported to Australia. The Framework Knitters Union leader pleaded for their lives and was himself imprisoned from April to November 1817.

The government sent more troops to the Midlands and North than the Duke of Wellington had used in the Peninsular War. Tory Prime Minister Margaret Thatcher similarly sent thousands of police into the coalfields during the 1984-85 miners’ strike.

Lord Liverpool’s Tory government stood for “tranquillity and harmony” – aristocracy at the top of society and poor at the bottom, accepting their lot without complaint.

Britain is often claimed to be the oldest parliamentary democracy. In 1817 fewer than 3% of the population had the vote. Birmingham, Manchester and Leeds had no MPs. One ‘rotten borough’ of 32 people had two!

‘Hampden Clubs’ were set up from 1812, campaigning for votes for all householders and annual parliamentary elections (instead of seven-yearly). Like many other industrial towns and villages, Pentrich had its own Hampden Club.

A national petition gained 500,000 signatures. It was handed in at the opening of parliament in January 1817 – and ignored. The Prince Regent’s coach was then attacked and a window broken.

Encouraging the demonstrators was William Oliver, a government spy and agent provocateur.

On 5 May Oliver told a delegates’ meeting in Wakefield that 70,000 Londoners would support an uprising, urging those present to organise for 9 June. Other delegates estimated they could turn out 150,000 from Birmingham and 90,000 from Manchester.

In fact some ‘delegates’ at the meeting had no authority to be there and these figures were totally made up. Home Secretary Lord Sidmouth planned for the 9 June uprising to justify further repression.

Oliver went back to the Home Office and then to Sheffield, where he tried to incite an uprising at a meeting with claims that 140,000 Londoners would join them if they did. 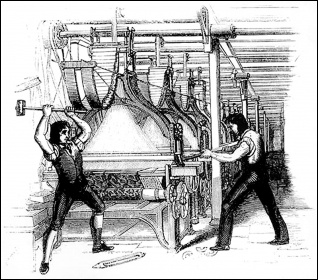 An engraving of Luddite framebreakers   (Click to enlarge: opens in new window)

At a Nottingham meeting on 6 June he argued: “They were ready to rise in Birmingham, Sheffield and many parts of the North, and that if Nottingham, Derby and Leicester did not rise, they would deceive the other parts.” In fact, the deception was all Oliver’s.

The Pentrich committee chose framework knitter Jeremiah Brandreth to lead the march to Nottingham. Addressing a meeting on 8 June, he urged every man “must turn out and fight for bread. The time is come you plainly see, the government opposed must be.” The following night in heavy rain, the marchers set out armed with scythes, pitchforks, sticks and a few guns.

The next morning the Light Dragoons were waiting to arrest them. A report described a “picture of despair and wretchedness, none of them seeming to be above the rank of labourers or working mechanics.”

A grand jury – of landowners, slave-owners and industrialists – decided the prisoners would face charges of treason. Oliver’s role was covered up. Trial juries were packed with country gentry.

Three leaders were executed by hanging and then beheading. The Prince Regent ‘mercifully’ decreed the dead bodies should not then be quartered. Others were imprisoned and 14 transported to Australia for life.

Margaret Thatcher once said: “The idea that all are equal under the law is deeply rooted in our democratic systems and nowhere else.” The Pentrich uprising showed the opposite, as did Thatcher herself. All the forces of the state protected the ruling class’s interests against growing working class demands for democratic rights.

The capitalist state still defends big business. Agent provocateurs and undercover police have been used in anti-capitalist demonstrations, anti-racist and environmental campaigns and socialist organisations. But the working class today is far stronger than the Pentrich workers 200 years ago.