Link to this page: https://www.socialistparty.org.uk/articles/25707 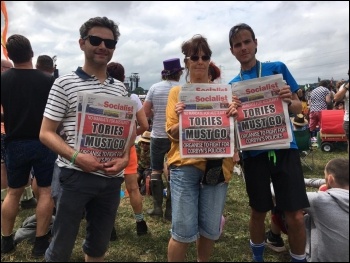 Selling the Socialist at Glastonbury photo   (Click to enlarge)

Thousands of people piled into Glastonbury's Pyramid Stage on Saturday to hear Jeremy Corbyn deliver his anti-austerity message. As the crowds eagerly waited, the now-famous chant began to spread gradually throughout the audience, finding a climax when he finally took to the stage.

Corbyn delivered an excellent speech in which he railed against the ugliest excesses of today's capitalist world. He publicly addressed the reactionary bigot Donald Trump and the miserable conditions that workers face in Britain today, at the hands of a ruling class that will stop at nothing to protect its exploitative interests.

He also addressed the devastation caused by imperialist wars and stressed the importance of understanding the root causes of them - including the never ending need for natural resources that this economic system breeds. After this, he rounded his speech off with an inspiring quote from the Romantic poet Percy Shelly:

Which in sleep had fallen on you

Corbyn's leadership of the Labour Party is faced with numerous challenges. He is still burdened by the right wing of the Parliamentary Labour Party sabotaging his leadership at any chance that they can get. And, unfortunately, the bureaucracy is still in the hands of the pro-capitalist right.

But at this moment, nobody could feel anything but hope for the future of socialist politics. A truly inspiring thing to witness. Corbyn's leadership has put socialism back on the agenda, and it is events like this that prove that.

This version of this article was first posted on the Socialist Party website on 26 June 2017 and may vary slightly from the version subsequently printed in The Socialist.