Editorial of the Socialist, issue 954 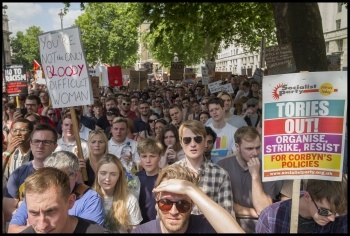 It took them 18 days following the election, but the Tories and the Democratic Unionist Party (DUP) have managed to agree a 'supply and confidence' deal which will allow Theresa May to form a minority government. The announcement was a muted affair, reflecting that this is no great victory - quite the opposite. It is only a first step on a rocky (and perhaps not very long) road ahead for Theresa May and the Tories.

They are hamstrung on all major policy decisions. There remains no agreement within the Tories or between the government and the EU on the way forward for Brexit. And the threat of a mass movement, spurred on by the popularity of Jeremy Corbyn and his anti-austerity policies, continues to loom large - with the potential to bring down this weak and wobbly government.

The DUP will hope that the concessions they negotiated will win them favour among their majority working class Protestant voters. Funding for Northern Ireland will be £1 billion more than planned and the Tories' plans to scrap the pensions triple lock and winter fuel payments are, as predicted, dead in the water. But these points can quickly be pushed into the background in the minds of working class people in Northern Ireland as austerity continues to bite and the DUP and other parties, from both sides of the sectarian divide, continue to hold back advances on women's and LGBT+ rights, for example.

Immediately the nationalist parties in Scotland and Wales called foul on the extra funding for Northern Ireland. In reality it shows that when the political will is there, money can be found - something that should give confidence to all anti-austerity campaigners. It also adds weight to the call of the Socialist Party and others, including several trade unions, for Labour councils to refuse to implement Tory cuts and lead campaigns to demand the necessary money from central government to fund local jobs and services - a demand that Jeremy Corbyn should now clearly come out in support of.

This would be a vital part of turning the enthusiasm for Corbyn's general election campaign into a party that can bring about the type of change outlined in his manifesto - a process which remains obstructed by the Blairites. The right wing of the party, although having to tread carefully following Corbyn's success, remains absolutely opposed to Corbyn, his policies and the hundreds of thousands who have joined Labour to support them. They will manoeuvre in whatever way they can to prevent the new, anti-austerity layer from making an impact.

The executive of Enfield North constituency Labour Party, for example, has decreed that there will be no election of delegates to Labour Party conference this year - instead the right-wing leadership has selected a delegate who members can 'advise' how to vote. This is the area where local Labour MP Joan Ryan issued a letter to Labour voters during the election stating that local people had more faith in Theresa May than Jeremy Corbyn and that May would definitely win with an increased majority.

The task of removing Ryan and those like her, both MPs and councillors, is urgent to ensure that the saboteurs are not in position to undermine Corbyn and the left for a single other election. Corbyn and all of his supporters should campaign for mandatory reselection contests to allow members - as soon as they have joined - a democratic say in who their public representatives are.

They should also support throwing open the doors of the Labour Party to all those who support Corbyn's stand. That means readmitting those who were expelled for standing up to the right wing - either in support of Corbyn or in battles against the Blairites' takeover in the past - and allowing affiliation from all anti-austerity and socialist forces, including the Socialist Party.

These democratic changes should be put out for discussion among the whole Labour Party membership. Corbyn could call a referendum within the party on a new constitution to democratise the structures, backed up by a series of mass rallies on the type of party the movement needs. Such measures, combined with boldly leading campaigns to win the policies in Corbyn's manifesto now, could cement the Labour Party once again as one seen as of and for the majority of working class people.

Corbyn has already changed the terms of debate that had been set by neoliberal politicians of all parties for decades. The ideas of rejecting austerity, of there being a choice, of starting from the needs of ordinary people rather than the wants of big business, even of nationalisation and elements of socialism, are back on the agenda. This is an enormous step forward, which cannot be wasted.

Scenes from this year's Glastonbury festival should dispel once and for all the myth that people are apathetic. Tens of thousands rushed to hear Corbyn's speech; the 'oh Jeremy Corbyn' chant became the anthem of the weekend; queues of young people gleefully waited for him to pour them a pint. Drawn to the pledges of free education, scrapping zero-hour contracts, a £10 an hour minimum wage, investment in public services and so on, people have glimpsed what is possible.

It's clear that the desire to fight and win those demands is not going away post-election. The 'Tories out' demonstration on 1 July can be just the first step of a movement including further mass protests, strike action, student strikes and occupations. Armed with a mass workers' party that can be the political wing of such a movement, and with socialist ideas, this can begin to transform things in the interests of the majority.