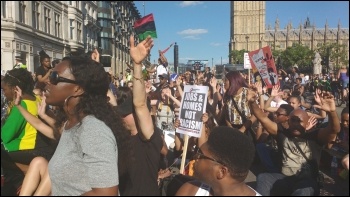 Anger over the death in police custody of another young black man erupted onto the streets of Newham in east London last Sunday, 25 June. Protesters demonstrated in Stratford and later outside Forest Gate police station demanding justice over the death of 25-year-old Edir Frederico Da Costa, who had been arrested in Newham ten days earlier. Clashes between some protesters and police later took place.

In 2015 the IPCC had its reports clearing the police of unlawfully killing black men Olaseni Lewis and Sean Rigg overturned. The then home secretary Theresa May was compelled to launch an investigation following a spike in the number of deaths in police custody.

The unexplained death of Frederico Da Costa has again highlighted the unaccountability of police and also the targeting by police of young black men.

Since 1990 over 1,500 people have died in custody and other police incidents, of which over 10% have been black and minority ethnic. Some research suggests even higher figures.

In 2011 the shooting dead of Mark Duggan by police in north London sparked widespread rioting for several days across several cities in England.

Democratic control - through elected local authority police committees, with control over resources, discipline, training and day-to-day policy - is necessary to ensure public accountability of the police.