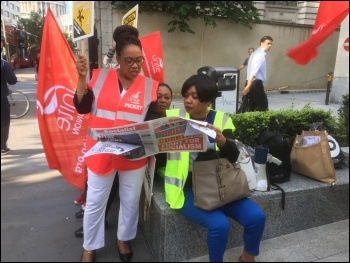 Sales of the Socialist hit a six-year high this spring thanks to the tireless work of Socialist Party members and supporters during the recent general election. We were out on the streets from the beginning to the end of the general election, initially alone in saying that Jeremy Corbyn could win with a bold anti-austerity message.

Birmingham branch started a new regular sale during the election. Many of its sales were to undecided voters, showing the impact of the Socialist Party on boosting support for Corbyn and for socialist policies.

Huge sales were achieved at Jeremy Corbyn's election rallies: 250 in Islington, 194 in Hull, 150 in Birmingham, 130 in Wirral and 100 in Gateshead, to name a few. People agreed with our proposals to transform Labour into a truly anti-austerity party and to kick out the Blairites.

You may have seen Socialist sellers at bus and train stations. Coventry West branch started a weekly sale just over a year ago, 700 papers have been sold since then. Coventry East has followed suit, selling 45 in its first six weeks.

This summer has also seen some big sales - over 800 at the 1 July anti-austerity London demo, and 350 at the Durham Miners' Gala.

For just £1 a copy, the Socialist provides readers with campaign reports and political analysis written by working class people at the forefront of struggle, unrivalled by the capitalist media. That £1 also goes to fund the fight to improve the lives of millions of people, and end capitalist cutbacks and misery. That's why many people pay the solidarity price of £2 or more.

Wirral Socialist Party Branch has a regular Saturday campaign stall in Birkenhead (a recent stall sold 32 copies of the Socialist and raised £170 fighting fund). However, we have decided to start a regular Sunday stall in New Brighton.

In both places we have been campaigning in support of the RMT union strikes to keep safety-critical guards on Merseyrail trains. Public support is overwhelming.

New Brighton is a seaside town where Scousers traditionally come to for a day out. Over the last two sunny Sundays we have sold 44 copies of the Socialist and raised £110 fighting fund. Clearly on Wirral workers prefer a dash of socialism with their ice cream!