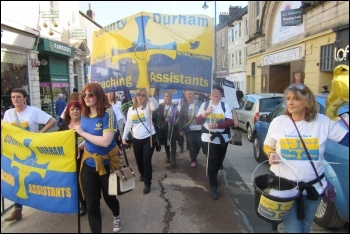 Durham teaching assistants (TAs) in education unions Unison and the ATL have voted to reject the latest divisive offer from Durham council. The fight for fairness continues.

Up to 2,000 TAs have taken numerous days of strike action over the last 18 months against Durham council's plans to sack all 2,700 teaching assistants and re-engage them on term-time contracts that could cut their pay by up to 23%.

The TAs have run a solid, energetic campaign against the attacks by the Labour council including at Durham Miners' Gala where they chanted: "Who are we? Durham TAs! What do we want? Fair pay! When do we want it? Now!"