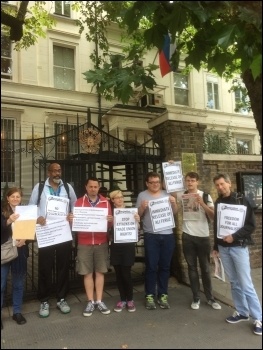 But Ali remains incarcerated in the so called “Suvsig” – a prison for foreigners just outside Moscow, for a “crime” he did not commit.

Click here for a video produced by the Independent Journalists Union calling for Ali’s release. 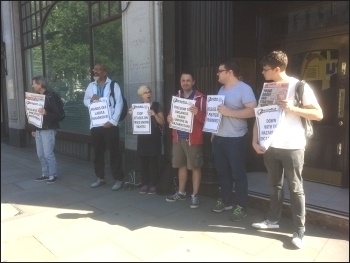 Outside the Kazakhstan embassy, photo by SP   (Click to enlarge: opens in new window)

She was accused of ‘misuse of powers’, but this charge was clearly a ruse to punish her for supporting workers’ struggles – including her public support for the hunger strike by oil workers in Mangystau in January.

We also strongly protest against the persecution of other trade unionists, including the Deputy President of the CITUK – Nurbek Kushakbaev – who was in April sentenced to 2.5 years in prison; and the head of the oil workers’ protest – Amina Yeleusinova – who was in May sentenced to two years.