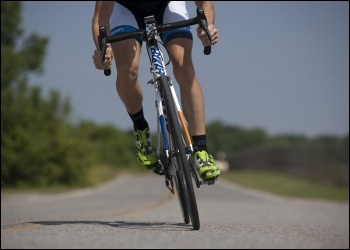 As I cycled back from work along the South Circular Road, I decided I should write some thoughts about some of the anti-cyclist prejudice that seems to have been whipped up as a consequence of the conviction of cyclist Charlie Alliston.

Let me say at the outset that I am certainly not automatically jumping to the defence of the convicted cyclist. There can only be heartfelt sympathy for pedestrian Kim Briggs' husband and family who have suffered such a sudden and tragic loss.

The trial and verdict have also been hotly debated among regular cyclists like myself. We all know that, just like car drivers, there are people who cycle badly and give others a bad name.

However, we also know that when you crash on two wheels rather than four it is the bike rider who is likely to come off worse. That includes crashes with pedestrians - as my brother-in-law can vouch for when he ended up hospitalised when someone stepped off the pavement into his path as he was riding slowly past.

Kim Briggs was just one of the many fatalities and serious injuries that have resulted from cycling accidents. The Royal Society for the Prevention of Accidents reported 100 cyclists dying in 2015 alone, many at roundabouts and junctions when either a driver or cyclist failed to look properly.

Commuting on a bike in London is not just physical exercise, but also an exercise in constant concentration.

Looking out for the driver who is about to turn without indicating. The pedestrian about to walk off the kerb without looking. The erratic driving of those texting in the traffic, or even under the influence of one substance or another.

Of course, nobody but Charlie Alliston knows exactly what the circumstances were when he collided with Kim Briggs. He certainly didn't do himself any favours with the insensitive comments he posted online after the crash.

However, many cyclists have questioned attempts by the prosecution to demonise him, and the debatable 'expert witness' claims about stopping distances.

Alliston should certainly have had a front brake fitted. But without knowing more about how much time he had to react, it's hard to know whether or not that brake would have actually avoided the collision.

Unfortunately press reporting of trials rarely gives a balanced account - as the Jobstown defendants discovered in Ireland! We will have to trust that the jury who heard the whole evidence reached the right conclusion in rejecting the manslaughter charge.

Certainly some cyclists have complained that there appear to be double standards at work. They ask whether a driver would have been prosecuted if a pedestrian had walked out in front of a car without looking - if that was in fact the case with Kim Briggs.

On the other hand, I do wonder whether Alliston - without being able to change to a lower gear on his 'fixie' bike - could have been too concerned about maintaining his speed.

Having said that, it's important to stress that riding at a good speed does not imply riding dangerously. In fact, research suggests that slower riders are often the most vulnerable because - as the Times put it - "faster cyclists may be treated with more respect by drivers and subjected to fewer overtaking manoeuvres."

So when cyclists ride fast enough to keep up with the traffic, and go to the front of traffic queues so that cars can't turn left across their path, we are riding safely, not dangerously.

Rather than allowing the press to whip up division between pedestrians, cyclists and drivers, we should be united in demanding the urgent investment that is needed - particularly in London - to provide a safe, affordable, efficient and sustainable public transport system.

That needs to include investment in cycling infrastructure to provide for the increasing numbers of commuters who rightly see it as a healthy, cheaper and non-polluting way of getting to work.