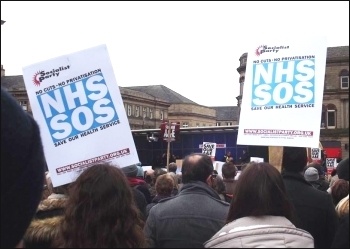 There is anger on the streets of Huddersfield.

Anger at the malicious cuts in health care proposed by the CCG which puts the local community at risk.

Anger that people will be forced to go for A&E treatment in another town, Halifax, along one of the busiest and most congested roads in West Yorkshire.

Anger at the systematic intimidation NHS staff face in the hospital if they challenge these decisions and the inevitable redundancies that will follow.

And anger that that the local trust was looking for a new private finance initative deal for buildings when the existing one is costing tax-payers £22 million a year in mortgage payments of more than £770 million by 2058.

In the last week, hundreds crowded round the Hands Off HRI campaign stall in the centre of town to sign a petition against the proposals and empty their change and sometimes their wallets into the collection boxes.

At a packed public meeting on 31 August with over 100 in attendance, the Huddersfield Hands Off HRI campaign voted unanimously to proceed to a judicial review if the clinical commissioning group (CCG) did not withdraw its plans to shut down the local A&E and downgrade the local hospital replacing it with a clinic.

At the meeting, Mike Forster, Socialist Party member and chair of the campaign outlined how the whole closure process had been recently referred to the secretary of state as a result of the relentless pressure and work done by campaign members. The campaign has raised £50,000 for judicial action and will now go on to crowd fund to raise more.

Speaker after speaker denounced the action of the CCG. Josh Smith, Socialist Party member representing Youth Hands off HRI, explained passionately how he depended so much on the NHS for his health all his life and was now facing having to pay for treatment.

He posed the question: "Whose NHS?" The roar back from the meeting was "Our NHS!" The fight goes on.