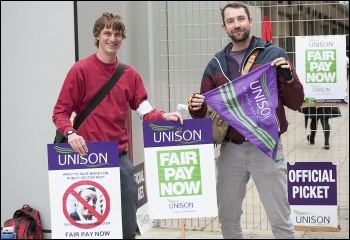 While the government continues to impose an unacceptable pay cap of 1% on this year's cost-of-living increases, Surrey council have actually decided not to offer a cost of living increase at all. While inflation hovers at 2-3% and when gas and electricity prices look to be rising by over 10%, this 'offer' will do nothing to relieve the cost-of-living pressures on county council staff.

The council has agreed to allow staff to move up their pay scales by a meagre 1% or by an incremental step (depending on their job role) but these incremental steps have been effectively capped or frozen for the past ten years.

Unison is also campaigning for a serious increase in the council's minimum wage rates - currently £8.25 an hour, less than the UK Living Wage Foundation's (LWF) £8.45 an hour. The council's offer does include an increase to a minimum of £8.46 an hour and an agreement to review this when the LWF adjusts its figures in November. The council is aiming to achieve the government's target of a £9 an hour minimum wage by 2020 - Unison believes this is not ambitious enough given the clear levels of in-work poverty across Surrey.

Paul Couchman said: "No-one seriously believes that public sector workers should have yet another year of pay misery. Yet Surrey council is not just suggesting a 1% pay cap - it wants to impose a total pay freeze on its staff.

"Last year, we recommended acceptance of what was actually still a fairly poor offer which was improved through negotiation. This year the council has come back with an even worse offer. We cannot accept this and call on all our members to vote No in our current ballot and be ready to take action if the council does not renegotiate."