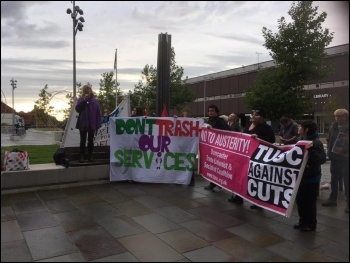 "They cut, we bleed - Save Women's Aid" was chanted outside Doncaster council chamber by approximately 30 trade unionists, socialists and community activists, on 21 September.

We were on the streets to demand that Doncaster council restore funding to Women's Aid, which provides a lifeline to women desperate to escape from domestic abuse. The sum being asked for is only £30,000. Doncaster's Labour-run council has around £90 million in usable reserves.

The councillors, mainly right-wing Blairites, showed their disdain by closing the blinds on the windows of the council chamber that looked out on the lobby.

Inside, angry protesters demanded to know, if Women's Aid is forced to close, are the councillors responsible prepared to pay for the funeral of the next local woman to die due to domestic abuse.

They also unfurled their banner, which carried the slogan: "They Cut, We Bleed".

The answer from Ros Jones, the elected mayor, was to adjourn the council meeting, while the protesters were removed.

The fight to defend Woman's Aid will go on. The protesters are unbowed and have an itinerary of action lined up for the coming weeks.

However, a fight for reselection also needs to be conducted within the Labour Party. It is time for those Labour mayors and councillors who continue to implement Tory cuts to be deselected and replaced by fighters who can transform Labour into a truly anti-austerity party.