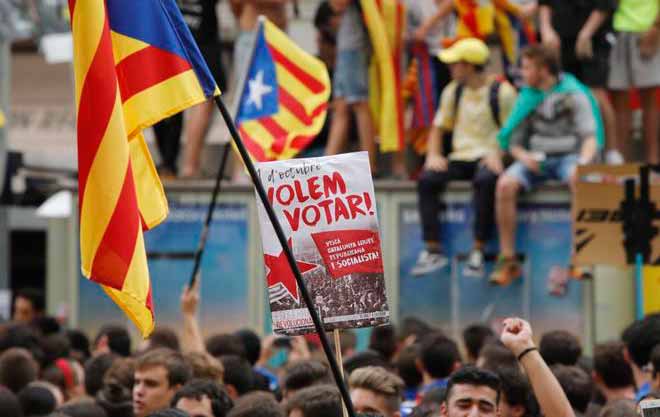 Shocking scenes of brutal police repression in Catalonia reverberated around the world on 1 October.

Working class and young people watched in horror as voters – from teenagers to pensioners – were shot with rubber bullets, thrown downstairs, pulled by their hair and beaten with batons. All this for peacefully trying to take part in a referendum on Catalan independence.

Amid the police violence, which has left over 800 injured, was also a clear vision of the heroism and solidarity of ordinary people. From5am hundreds of people gathered outside many polling stations, linking arms together to form human chains in preparation for the attacks.

Despite the police violence and judicial clampdown that people had already witnessed in the weeks leading up to the vote, they were determined to hold the polling stations- which they occupied for days leading up to polling – and keep them open to ensure everyone could exercise their democratic rights. Less than 5% of polling stations were closed by the police’s actions.

In several places firefighters stood in front of the voters and protesters to protect them from the police. In some cases the police didn’t holdback even then, and attacked the firefighters too.

As our sister party in the Spanish state has written: “The justification that the right-wing PP Spanish government is applying the law cannot mask that the law is unfair, undemocratic and goes directly against the aspirations of millions of Catalans who they are trying to muzzle.”

Only after these events, when it was impossible to ignore, did the British establishment press and politicians pay any attention to what has been happening in the Spanish state. Imagine their outraged response had the same been happening in a country outside the sphere of influence of British capitalism.

These events have revealed to a generation, outside Spain as well as in, that no capitalist state is ‘friendly’ to workers and young people when they organise and threaten the interests of the profit system.

But what the Spanish state and the right-wing government may have hoped to be a show of strength is in fact a massive sign of weakness and desperation.

Workers and young people responded with big shows of solidarity, with sizable demonstrations taking place across the state. A solid general strike then took place in Catalonia on 3 October, supported by all union federations. The repression has only spurred on the movement. The Socialist Party stands in full solidarity with the workers and youth of Catalonia and across the Spanish state in their struggle against this repression and for the right to self-determination. The Catalan people have the right to decide!