Link to this page: https://www.socialistparty.org.uk/articles/26331

Bus drivers across 11 depots around the North West took their first day of strike action on 19th October, with another two days planned for 23rd and 30th October. The Unite members working for Arriva North West are fighting for a pay rise and pay parity across the depots.

They accuse Arriva North West of using divide and rule tactics, and an element of 'performance related pay', across the region. There can be up to £2 an hour difference in drivers' pay from depot to depot.

Management are resisting pay rises, or arguing for less, in depots where the service isn't as profitable. It's through no fault of the drivers that fewer people might use a particular route and therefore they should be paid the same wherever they work.

They are not asking for much, just an increase above inflation. And considering Arriva North West is currently making a 15% profit on the service and one boss received a £43,000 bonus, they can certainly afford to give a decent pay rise!

Unite has tried to negotiate, including going to Acas, but it has been reported that the company is refusing to talk in any meaningful way.

The strike has been hugely effective with nearly every depot out and buses not running at all in some areas. In Wythenshawe, south Manchester, only three buses were running, compared to a normal 30 or so during peak times.

Two drivers who at first went into work then walked out and joined the strike, were hugged and had their hands shaken by workers on the picket line.

This strike, along with the dispute between the RMT and Arriva Rail North against Driver Only Operation, highlights the need to take these services out of the hands of private companies. The bus services should be brought back into the public sector where they can be run for the needs of passengers, and drivers can be given a fair deal. 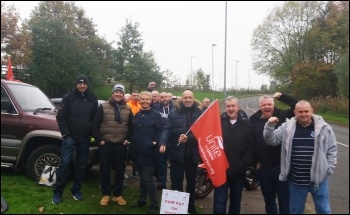 Arriva drivers in Runcorn staged a 100% walk out today in support of their fight for a living wage. Unite Shop Steward Ste Cunningham stated: "Drivers are only asking for 3%, in line with inflation, but management keep coming back with lower offers. We've been in negotiations since April, but management refuse to make an offer we can recommend to our members."

The strike is solid across Merseyside and Cheshire, Ste informed us, with managers attempting to run one service in Winsford, without much success.

Many passengers were unaware of the strike, as Arriva has done little, if anything, to inform them. Runcorn has a dedicated bus route around the town which is heavily used and by failing to communicate with passengers, Arriva has failed in its duty to them. Public support in Halton is high for the drivers, and the strikes planned for the next few weeks are expected to go ahead.

Socialist Party members in Liverpool and Birkenhead visited the pickets to show support, which was warmly received by the drivers. At the Birkenhead picket, the idea of coordinating strikes on the buses with the RMT action on the railways was strongly supported by strikers who know a common thread is the Arriva company.

Arriva is trying to boost the profits it repatriates to Germany by getting rid of train guards and holding down bus drivers' pay. Unite and RMT reps as well as officials should jointly discuss dates of future strikes to coordinate for maximum impact.

Recent protests in Liverpool against the withdrawal of bus services on some routes show the need for the full return of public transport to the public sector with all the cuts to staff and services reversed. During the metro mayor election campaign on Merseyside earlier this year, TUSC candidate Roger Bannister put forward this policy, explaining that the metro mayor position could be used to push forward these kinds of anti-austerity pro-socialist ideas.

Labour in local government on Merseyside has been showing no intention of adopting these kind of ideas. The Socialist Party and TUSC supporters will advocate them at every stage and support workers like the bus drivers and rail guards who are, together with the travelling public, those paying the price for the privatisation racket.

This version of this article was first posted on the Socialist Party website on 19 October 2017 and may vary slightly from the version subsequently printed in The Socialist.