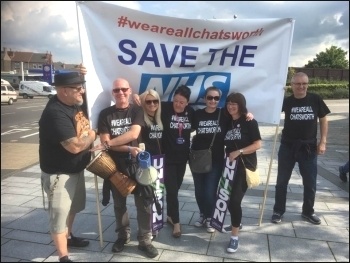 Staff, patients and family members had launched a campaign within days, getting massive support from local people. With TV, radio, social media and press publicity, the trust directors and clinical commissioning group (CCG) asked to meet with the campaign.

The meeting was held on the ward, with patients in wheelchairs, a bed-bound patient, staff and family members. A successful demonstration marched through town.

The CCG launched a full review of neuro-rehabilitation services in the area. Meanwhile, the ward remains as busy as ever.

Over recent weeks staff and patients have met the review project manager several times. The preliminary report is expected at a CCG public meeting on 14 November.

Although there is cautious optimism, the campaign is producing its own plan for neuro-rehabilitation. Pressure will need to be maintained to get the plan implemented, as the CCG is strapped for cash. From the start, the campaign made clear Chatsworth ward must be saved - but not at the expense of cuts elsewhere.

Unison, the union with most members on Chatsworth ward, has now given its official backing to the campaign, joining Unite and the nurses' organisation RCN. It has taken time and pressure from below to achieve this. It is a further blow to Sherwood Forest Hospitals Trust's senior management, who have been used to so-called 'partnership working' with some trade union officers.

Chatsworth ward workers rightly expect their unions to support their campaign to defend the vitally needed services they provide.