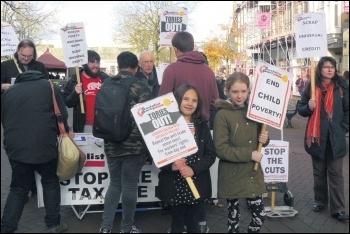 Universal Credit benefit changes will cause untold misery for thousands in Carlisle when they are fully rolled out in April next year. On 4 November members of Carlisle Socialist Party, who are part of 'Carlisle Universal Credit Action Group' held a campaign stall in the town centre to highlight its effects.

The number of families with children being referred to foodbanks by social workers has shot up in the last couple of years. Already 30% of children in the UK are classed as poor, two thirds of those from working families.

Households with someone claiming Universal Credit are described by the Department for Work and Pensions as 'benefit units' - a deliberately dehumanising term which treats everyone as a unit of productivity, rather than addressing their individual needs.

Many people who have experienced the system will be scared to claim money they are entitled to, falling into poverty and destitution. The government has deliberately made the system as nasty as possible.

Members of the public signed our petition calling for Universal Credit to be stopped and replaced with a living income and proper public services for those in need, as well as calling for the outlawing of precarious work and providing people with proper jobs and a real living wage.