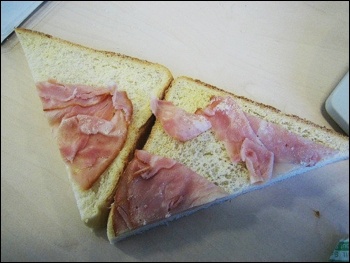 It's not sandwiches that have priced young workers out of the housing market, photo by rjp/CC   (Click to enlarge)

So according to an upmarket estate agent, the solution to the housing crisis is... not buying sandwiches.

Strutt & Parker says that just by giving up six "luxuries" - including nights out, holidays and supermarket sandwiches - Millennial couples can save up a substantial part of a home deposit.

They calculate £94,000 is the average deposit for a house in London, and that we could save that in just five years. To achieve the whole deposit would mean saving £18,800 a year!

They suggest your parents would make up some of it - they assume your parents can afford it. But leaving this aside - and assuming you had, by some miracle, managed to raise enough just by having no life for five years - you still need to get a mortgage.

The average house price in London is £481,556. Mortgage providers will typically lend you around four times your basic salary.

Working full-time on the London Living Wage will earn you just under £20,000 a year before tax - with many workers, especially young workers, not even getting that.

How about building council homes, and capping private sector rents, and raising the minimum wage? For some reason I don't think making your sandwiches at home or giving up avocado toast will sort it out.