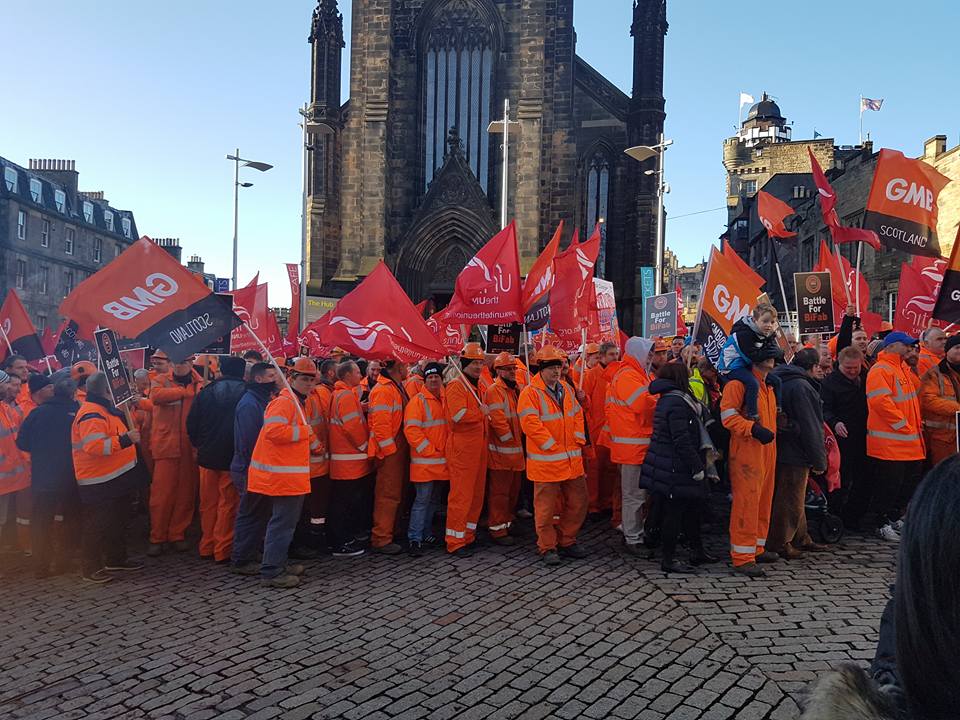 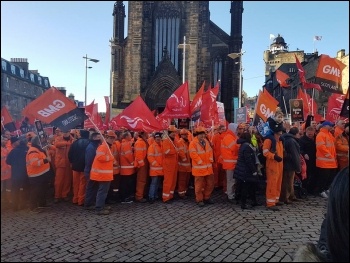 Workers at the three threatened Burntisland Fabrications – BiFab – yards in Fife have won a guarantee that their jobs and wages will be secured, at least until April 2018. Action by workers and the GMB and Unite trade unions has delivered this important breakthrough.

On 12 November, the company said it had no money to pay wages and was giving notice that it intended to enter administration. The jobs of 1,400 workers who either work for BiFab or who rely on the company for work via contractors were hanging by a thread.

At mass meetings on 13 November workers agreed a ‘work-in’ in order to complete the contract – without being paid – but also to ensure they occupied the sites to prevent any attempts at asset-stripping.

As Gary Smith, Scottish secretary of the GMB, told a rally outside the Scottish parliament: “If you had not occupied those yards then your jobs would have gone and the yards shut.”

The occupying of the yards, beginning a ‘work-in’ and a mass march on 16 November to the Scottish parliament to demand government action has paid off.

The major companies involved in the project have agreed to provide BiFab with money that will allow the work to continue and workers to be paid.

The threat of BiFab entering into administration, management claimed, was due to money going unpaid to them by the Dutch company Seeway Heavy Lifting (SHL). SHL is contracted by the Scottish power giant SSE whose Beatrice Windfarm Project the BiFab workers are employed in.

As a result of the action of the workforce, the Scottish government and the main companies involved agreed an arrangement that would ensure wages were paid and the jobs guaranteed until the end of the project. The fact that the completed wind turbine platforms would not be released by the workers would have been an important factor in SHL and SSE agreeing to a deal.

However, as Socialist Party Scotland has called for, only an opening of the books of all parties involved in this project for inspection by the trade unions would get to the bottom of what was really going on. The unions should demand full access to this information to get a real picture of what is happening to BiFab.

1,000 workers, their families and trade union supporters marched to the Holyrood parliament building to demand action. More than 600 workers walked off the job to travel to Edinburgh for the demonstration. However, dozens of workers stayed behind to blockade the gates of the yards to ensure none of the completed work could be moved.

The GMB convener for BiFab, Mike Sullivan, called on the Scottish government to take the plants under their control and to ensure wages were paid.

Socialist Party Scotland members distributed hundreds of leaflets to workers in support of the struggle and calling for the books of BiFab, SHL and SSE to be opened to trade union inspection.

As is normal in these big projects, a labyrinth of contractors and sub-contractors are used by big business to lower costs and increase profit.

That’s why Socialist Party Scotland calls for the nationalisation of the major energy and construction firms to guarantee full rights and the rate for the job across the industry.

With renewables, oil decommissioning and waste to energy projects increasingly important for jobs, public ownership and democratic control by workers and the government is essential.

While this victory for the workers at BiFab is welcome, the future of the company is still uncertain after April 2018. The jobs and the yards could be secured with a programme of massive investment into the renewable industry and public sector control of the energy and fabrication industry. BiFab should be brought into public ownership by the Scottish government to secure the skills and jobs there.