No divorce bill to subsidise capitalist elites of Europe

For a socialist, internationalist Brexit 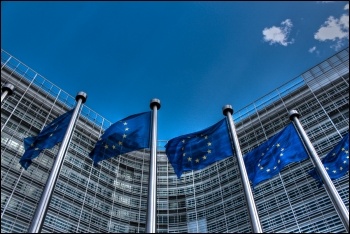 For a while it looked like Theresa May might be about to crash out of office, as her fractured, divided party, propped up in government by the DUP, seemed unable even to reach agreement on a deal on the 'first stage' of Brexit negotiations. This time, however, the crisis did not prove fatal. A deal, involving numerous concessions by May, and a lot of deliberately ambiguous wording, has been cobbled together and acceded to by the DUP, keeping the show on the road for now. This so-called victory for May's negotiating skills has solved none of the problems that May and her government face; it has only 'kicked the can down the road'.

The most important conclusion for the millions of working and middle class people in Britain is that this government remains extremely weak and can be defeated. For as long as it remains in power, however, the norm will continue to be wage restraint, a catastrophic housing crisis, and endless cuts in public services.

For the majority of Britain's capitalist class, despite their horror at being represented by a party as dysfunctional as the Tories, the deal has raised their hopes. They now dare to dream that the 'soft' Brexit which would suit their interests might be achieved, despite the hard Brexiteers on the Tory right. After all, the government has acceded to the EU's demands for an exit bill of at least £36 billion, shamefacedly abandoning their previous posturing that the EU could 'go whistle'.

They have also agreed that, in the event of a 'no-deal' Brexit, there would be 'full alignment' between Northern Ireland and EU law. In reality this would only be possible in one of two ways - either a divergence between the laws of Northern Ireland and the rest of the UK, which would be unacceptable to the majority of Protestants in Northern Ireland, or remaining in the Single Market and Customs Union: that is, within the EU in all but name.

However, the welcoming of the deal by the Tory right does not mean they accept 'full alignment' by whatever means, but only that they had no choice but to agree it in order to prevent a complete collapse of the Brexit negotiations and hope, Mr Micawber-style, that something will turn up further down the road. It is likely that what will turn up will be the Tories repeatedly being forced to bang their heads against the reality that British capitalism is third rate, and that they have no choice but to make concessions to both the institutions of the EU and any of the other major powers with which they hope to negotiate favourable deals.

The nationalist 'hard Brexiteer' wing of the Tory party, which is fuelled by an utterly utopian dream of a return to Britain's past as a pre-eminent world power, offers absolutely no way forward for working class people in Britain. Brexit on their terms would undoubtedly mean job losses, economic crisis and further steps towards Britain becoming little more than a global tax haven. Nor, however, do the pro-EU capitalist politicians, who represent the interests of the major corporations, have any common interests with the majority of people in Britain.

Jeremy Corbyn should be leading the campaign against paying a penny for a divorce bill that will subsidise the capitalist elites of Europe, declaring instead that the money should be spent on the NHS, raising public sector pay and abolishing tuition fees.

Instead, the pro-capitalist Blairite wing of the Labour Party is campaigning for Labour to adopt - hook, line and sinker - the position of the capitalist class on Brexit. Jeremy Corbyn and those on the left of the party need to clearly reject this.

It is ludicrous to claim, as the Blairite Labour MP Chuka Umunna has, that the EU single market is, "uniquely, a framework of rules that protects people from the worst excesses of globalisation and unfettered capitalism." It certainly doesn't protect those fleeing war in the Middle East and largely kept outside of the borders of 'Fortress Europe'. They face the unimaginable horror of slave markets in Libya and risk drowning in the Mediterranean. But nor does it protect those already inside the EU's borders from the 'worst excesses' of capitalism. On the contrary, the institutions of the EU have inflicted terrible hardship on the workers of Greece, Spain, Portugal, Ireland and elsewhere. In Greece wages have fallen by an average of a third. In every country, including Britain, EU directives are used as a means to implement privatisation and drive down wages.

If Jeremy Corbyn were to launch a campaign for a socialist Brexit it would transform the situation. A socialist Brexit would mean ripping up the EU bosses' club neoliberal rules - not in order to create the more isolated and even more exploitative neoliberal vision of the Tory right, but to begin to build a society for the many not the few. It would mean taking socialist measures so that the enormous wealth in society could be harnessed to provide everyone with the prerequisites for a decent life: a high-quality, secure home, a good job, free education, a top class NHS, a living pension and more. Such a programme could unite working class people in Britain, regardless of how they voted in the referendum.

It would also act as a beacon for workers and young people across Europe to take the same road, opening the path to mass opposition to the EU bosses' club - and towards a democratic socialist confederation of Europe. Jeremy Corbyn should urgently use his international anti-austerity authority to help establish a new collaboration of the peoples of Europe on a socialist basis. Only this approach can cut across the confusion created by the lies of all wings of the Tory party.