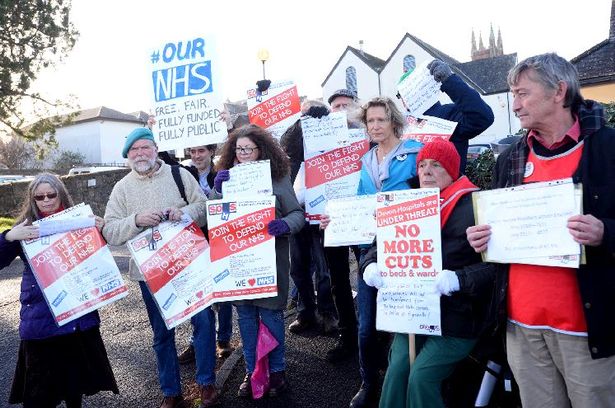 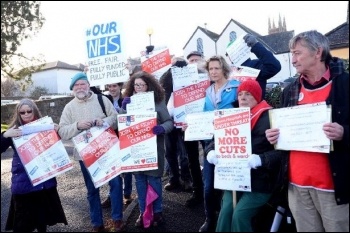 A 300-strong march against cuts and privatisation of the NHS in the small town of Totnes on 2 December was organised by South Devon Save Our Hospital Services (SOHS) – launched by Torbay and South Devon Socialist Party – and supported by Totnes Labour Party.

Devon clinical commissioning group (CCG) is required to make a further £400 million cut to NHS services under a ‘capped expenditure programme’. This is on top of the £100 million in 2017, which has already seen the closure of four community hospitals. We invited our MP Sarah Wollaston to receive our 3,000-strong petition but she declined, agreeing instead to meet me at her surgery on 8 December.

On the march a mock coffin bearing the slogan “120,000 deaths linked to Tory austerity” was left outside the Conservative Party office by protesters. Sarah Wollaston reacted by evoking the murder of Labour MP Jo Cox and accusing the organisers of threatening a woman and her family by sending her a coffin.

On 8 December SOHS organised a small lobby outside the Conservative club. Along with Totnes Labour we refuted Sarah Wollaston’s allegations and publicised ten questions about threats to local hospitals and services which I collated to raise with the MP.

The threat to our district hospital, Torbay, is very real. On the same day I went to see Sarah Wollaston the Health Service Journal reported that Torbay and South Devon Foundation Trust is offering up to £100 million (funded by the sale of its capital assets) to a private company to “help finance its future clinical model”.

The report goes on to say similar schemes in the North West were scrapped over “the preferred bidder’s link to… Grenfell Tower”.