Link to this page: https://www.socialistparty.org.uk/articles/26627 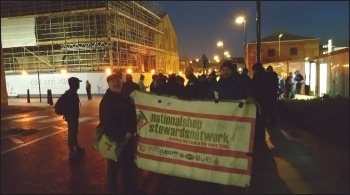 One week after Unite's national Day of Action against blacklisting by the construction companies, 54 electricians were locked out of the Woolwich Crossrail site by Balfour Beatty.

In a tremendous act of solidarity, they were joined in an impromptu picket by the rest of Balfour's 150 electricians, who refused to go into work.

Another 70 workers for VVB Electrical walked off the job in support at the North Woolwich, City Airport and Plumstead portals.

They are determined to keep the pickets going until they force Balfour to keep them on through to the New Year and beyond.

Walkouts at other Crossrail sites and other Balfour projects can force the bosses back. Given that the workers have been sacked for exercising their legal right to hold a strike ballot, alongside the protest action the union should look immediately at claims for trade union victimisation and a claim for interim relief for the members.

Balfour was one of the eight building employers who last year, collectively paid an estimated compensation of up to £75 million to blacklisted workers.

Another of the firms, Skanska, was one of the targets on last Wednesday's day of action, with workers, including many from the Woolwich job, joining the protests both inside and outside their HQ.

These companies deny the union's claim that these anti-worker, anti-union practices continue to this day. Yet the electricians were in the process of balloting for industrial action for a finishing bonus when yesterday they reported being summoned one by one to the office and put on 'gardening leave', effectively paid off until Christmas with no return.

Laid-off workers said that they were told that agency staff weren't replacing them, yet there have been reports of agency workers being signed up at the Whitechapel site.

As is common in the construction industry, this comes across as 'scrooge' bosses getting rid of workers before Christmas to avoid their financial responsibilities.

The story of Crossrail has been one anti-union measure after another on what is the biggest taxpayer funded project in Western Europe.

In 2013, Frank Morris, now on the Unite Executive, fought and won his reinstatement after being excluded from the project for 12 months.

A year ago, workers at the Tottenham Court Road site lost their jobs after fighting for a bonus payment with workers across Crossrail.

All trade unionists must build solidarity and support for the Woolwich workers to inflict a defeat on Balfour and win a victory for direct employment that will benefit all construction workers.