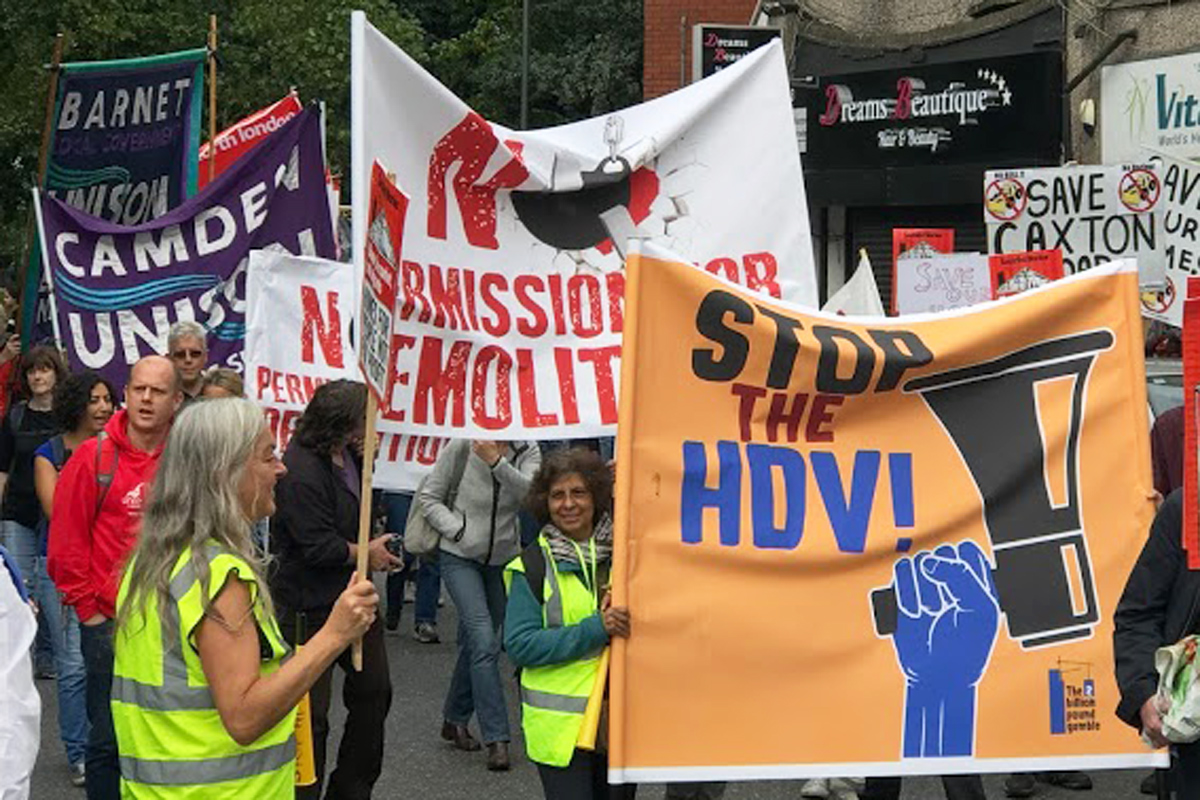 Editorial of the Socialist issue 981

Protesters in Haringey marching against the HDV   (Click to enlarge: opens in new window)

Headlines scream about a hard-left takeover of the Labour Party. No wonder. Under Tony Blair, big business found a safe political alternative to the Tory Party. How they must now long for the return of pro-capitalist, pro-austerity Labour as they watch the divisions in the Tory party and fear they have no stable political expression for their interests in Brexit.

The billionaire press hopes to whip up a storm to assist the right-wing Blairites in the party in curtailing Corbyn’s progress. Many people who have been enthused by Corbyn’s policies, however, will look at recent events in the Labour Party and hope that this means change is under way – that Labour is becoming an anti-austerity, even socialist, party that will speak for them and improve their lives.

The latest developments that raise these hopes are that Corbyn supporters have now won a small majority on the Labour Party national executive committee (NEC) and chair the disputes committee. Subsequently, some left-wing activists who were excluded from the Labour Party have now been readmitted.

The NEC intervened in Haringey, albeit in the mildest of tones, calling for the Haringey Development Vehicle (HDV) to be “paused” for “mediation” between anti-privatisation councillors feeling the pressure of a big local campaign and arch-Blairite privatisers.

At the same time, Jeremy Corbyn has made a speech about ending privatisation in public services and the return of “municipal socialism”. In a speech to councillors, he said it is crucial for local authorities to reverse the privatisation of public services. The pledges include ballots of residents prior to redevelopment of council estates, replacement of lost social housing, and more realistically-affordable housing costs.

Succumbing to the pressure of multiple housing campaigns in London against gentrification, the capital’s mayor Sadiq Khan has now announced that he will insist on residents’ ballots, having previously opposed them. This should give confidence to all those campaigns battling for a ballot, such as the Save Our Square campaign in Walthamstow, which is currently being blocked by unelected highly-paid council officials from the right to even petition for a referendum!

Corbyn went so far as to imply that these measures should happen straightaway, pointing to cases where councils are already “taking measures to bring services back in-house and reject costly PFI-style models”. These announcements don’t come a day too soon. Labour councils have continued, despite Corbyn’s leadership of the national party, to socially cleanse their boroughs, privatise, close and cut services, jobs and pay. The spectre of the end of the central government grant to local authorities in 2020 means that Labour councils are more and more looking to sell-offs, luxury developments and deals with private developers to increase income.

If the huge support for Corbyn is not to be undermined, it is imperative that a clear instruction is issued from the top that councils must stop. The plans must also go further. We need mass council house building. We need rent control in the private sector. And we need to stop and reverse the cuts.

But Corbyn hampers himself from putting out a clear instruction because of the insistence from those around him in the leadership of Momentum on trying to achieve ‘unity’ with the right wing of the party. As Corbyn himself was quoted as saying in relation to Haringey, the intervention was a “one-off” and “we want to bring people together”.

Yet while the left continues to hold out an olive branch, the right mount a ferocious fight every time they think they have a foothold to do so. After the surge for Corbyn’s policies in the general election, the right wing felt at that stage they would have no support, and they reined in open attacks.

But the moment they see a chance, they seize it. Tony Blair started 2018 campaigning to re-run the EU referendum, with Chuka Umunna and others in tow; the right wing in Unite are attempting to re-run the leadership election against Corbyn-supporting Len McCluskey. These are all ways to undermine Corbyn.

Corbyn-supporting MP Chris Williamson was moved to the back benches after he made his proposals on council tax. And Labour councillors, the vast majority who are part of the bulwark of the opposition to Corbyn, undermine him every day with their policies of cuts and privatisations. The condemnation of the NEC’s mild intervention in Haringey by over 70 council leaders, describing it as “dangerous and alarming” and “an affront to the basic principles of democracy”, makes it clearer than ever: the Labour Party is still two parties in one.

Momentum is occasionally the centre of press furore. They now claim 35,000 members, and in the general election ran a wide-reaching social media campaign and mobilised people to canvass in Labour marginals. But when it comes to the crucial question of standing up to the Blairites, Momentum’s leadership fails. The vast majority of council candidates that will be up for election in May are opponents of Corbyn.

Momentum leader Jon Lansman continues to rule out mandatory reselection of MPs. In an interview with the Independent he said “we have made it clear that we are not going to campaign to reselect anyone at all, anywhere”. He added that local areas might decide to do so. But posing the question like this has practical consequences.

It completely disarmed Corbyn supporters in the councillor-reselection process and has resulted in few Corbynistas replacing right-wingers (outside of Haringey, where local left Labour Party members consciously rejected this approach). So now Momentum members are expected to try to mobilise voters to support cutters and privatisers once more – the very people communities are raging against.

It is urgent that Labour is democratised. Getting a Corbyn-supporting majority on the NEC does not end the matter. Readmittance of expelled socialists must go much further than the odd few. In November 2016, 75 expelled and excluded socialists – including former Labour MP Dave Nellist and former Liverpool Labour councillors such as Tony Mulhearn – applied for readmittance, backed by hundreds of signatures of trade unionists and community campaigners. The application was rejected by Labour general secretary Iain McNicol.

The Socialist Party wrote to McNicol to ask the NEC to consider affiliation of socialist and campaigning organisations, including the Socialist Party, in the same way that the Co-op party is currently affiliated. This too was rejected.

We argue that there must also be restoration of trade union rights and the adoption of a democratic federal structure. On this basis, the Labour Party could really become a mass anti-austerity socialist party that draws together all those forces opposing the Tories, austerity and the super-rich.

Go over the Blairites’ heads

Just as he did with the general election manifesto, Corbyn should go over the heads of the Blairites to appeal to the members with a new democratic constitution. Reselection of MPs cannot wait. With the Tories so divided and openly discussing replacing Theresa May, Corbyn supporters need to prepare for a general election.

The millions who voted for Corbyn’s manifesto did so because they want to see something fundamentally different. There will be big hopes in a Corbyn government. Corbyn will come under ferocious attack from the capitalist class for any measures that restrict their ability to make profits. He must not allow himself to be trapped from day one by the capitalists’ representatives in his own party.

In the Socialist Party we will continue to do all we can to help mobilise a mass movement in support of Corbyn’s policies, and link those to the need to take the major banks and corporations into democratic public ownership – for a socialist society.