Link to this page: https://www.socialistparty.org.uk/articles/26911 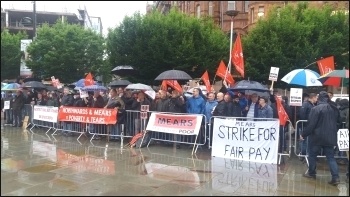 The long-running Mears dispute has ended in victory! Workers voted to accept a deal which means an average pay rise of 22%, and parity of pay across the workforce and in line with others in Manchester.

It also involves the revoking of the 'sackers' charter' Mears was trying to bring in (to attack terms and conditions) and no changes to pensions and holiday pay which had also been planned.

After taking over 80 days of strike action, 180 workers at Mears have been able to go back to work with their heads held high.

One of the Unite stewards at Mears spoke to the Socialist:

"The workers were TUPE transferred from Manchester City Council in 2006 who operated a bonus scheme, so that's why people were on different rates of pay.

"The workers were put on their average bonus before the TUPE and kept on this for nine years.

"The workers were constantly told there was no money in the pot. But just like Carillion, Mears were giving public cash to their shareholders and senior management in massive pay rises, while their workers, suppliers and subcontractors suffered.

"The resolve of the striking workers strengthened during the dispute, especially due to the underhand tactics deployed by the Mears account director and general manager.

"The workers received fantastic support from around the country. They had magnificent support locally from the Socialist media and Fujitsu workers who have their own ongoing battle."

This dispute shows, on the one hand, what is necessary in order to win - a programme of strike action coupled with protests and mobilisations, along with other striking workers, to put pressure on the council and management - and on the other hand, that it is possible to win significant pay rises when the workforce is united and prepared to fight.

This version of this article was first posted on the Socialist Party website on 20 February 2018 and may vary slightly from the version subsequently printed in The Socialist.