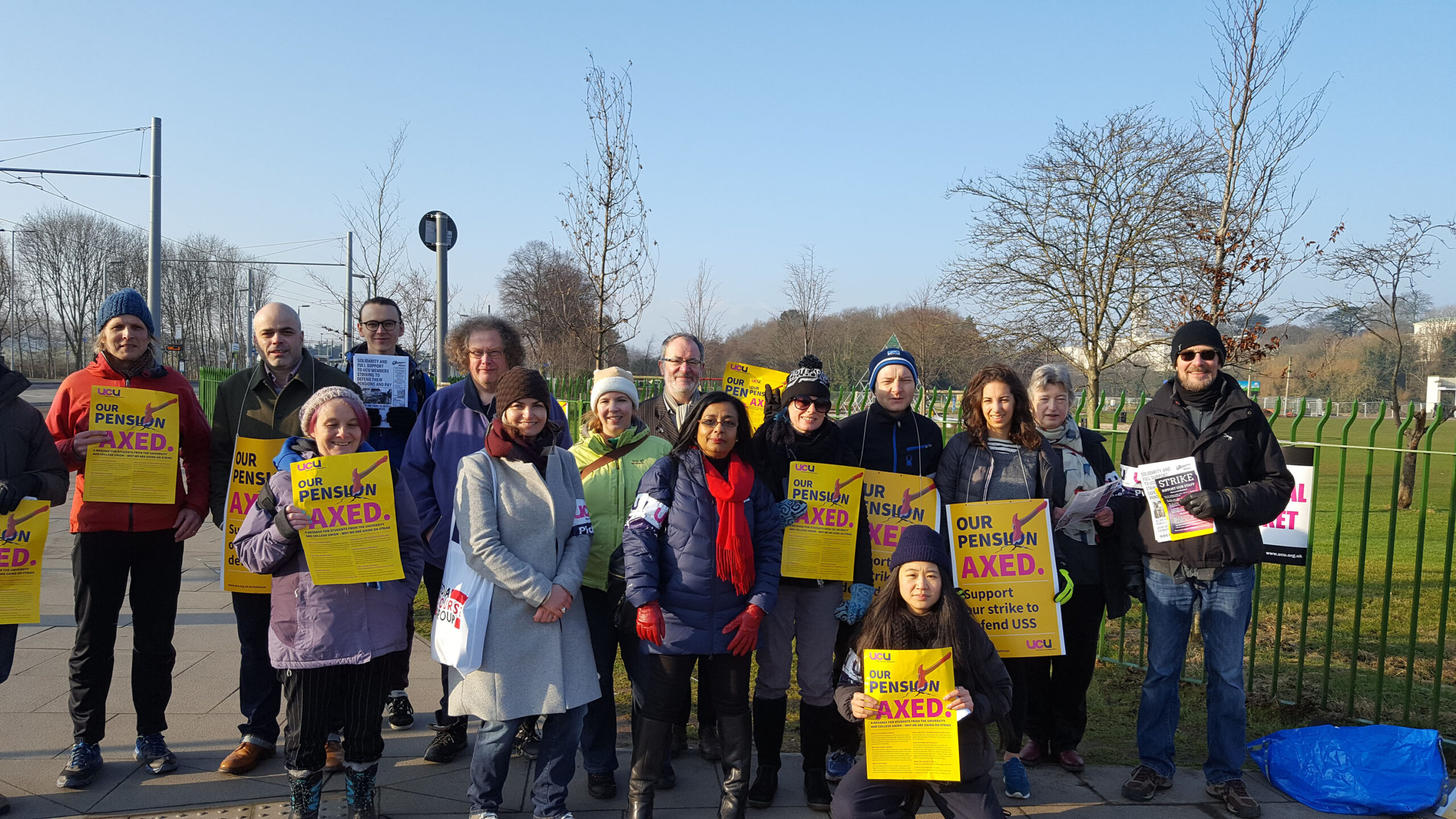 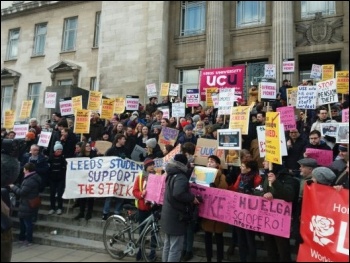 The Socialist Party gives its full backing to University and College Union (UCU) members in 61 universities starting their 14 days of strike action against plans to completely scrap the defined benefit pensions scheme. Here are some reports from picket lines and protests around the country: 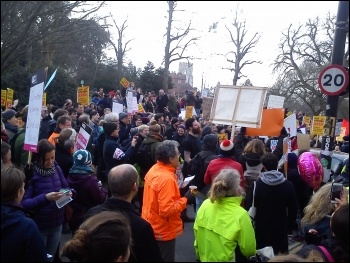 The brutal attack on lecturers’ pensions was met with a massive show of strength at Bristol university. UCU members began the first of 14 days of strike action with the biggest pickets the university has ever seen.

Members reported how the union branch has grown by 40% recently as workers seek to fight back against cuts that will see a majority of staff losing half their pension.

Staff were joined by hundreds of students as the 1,000 strong strike rally marched from the university campus to the city centre.

Speakers explained how the attack on pensions is linked to cuts, fees and the drive to a market in education.

Everyone was clear that they want an education system for people, not profit. The president of Bristol Students’ Union called on students not to cross picket lines, to loud applause and cheers. The solidarity was underlined by chants of: “Students and workers – unite and fight!” 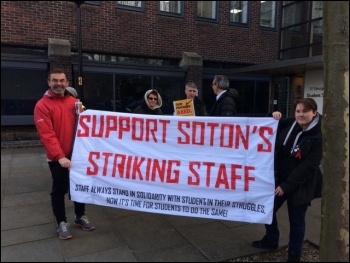 Pickets were out across Southampton campus in large numbers determined to show their opposition to the massive attack on their pensions.

One picket explained: “This is just the latest in a long list of problems we face, which is probably why there has been such strong support for the strike.
It’s part of the neoliberal agenda and if they succeed in reducing contributions to our pensions, they will make a more tempting package for privatisation. If our pension suffers, will it be teachers then health workers next?”

Strikers were buoyed up by the active solidarity of student activists who have been building support for the strike alongside opposing cuts and student debt.

Southampton Socialist Students has produced leaflets backing the strike and calling for the resignation of overpaid ‘vice-cutter’ Sir Christopher Snowden, linking the fight over pensions to the fight for free education. 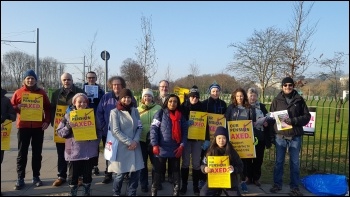 Pickets spoke to Socialist Party members about why they are striking and supporting action:

Cyril Rauch, a UCU rep said: “The change from a defined benefit scheme concerns me. Across Britain, university staff could lose between £10,000 and £40,000 a year, once retired. Why should the stock market define my pension in the future? We need laws to protect our pensions.”

Another striker said: “So many reasons – it’s not just about pensions – about education, universities as a sacred space – it’s about being together, about learning.”

One supporter said: “As a casualised teaching assistant employed via an agency, I am not part of the dispute; I am supporting the university lecturers who are on strike who work very hard, every weekend and evenings, to mark, sort things for teaching and do their own research.”

Also at University of Nottingham, Dr Neil Hughes, on the picket line, spoke to Pete Watson:

“This is the longest most concerted strike action I can remember for 25 years. The number of strike days planned shows the strength of feeling about this issue. It’s not just about pensions though, it’s also against the marketisation of higher education as a whole. It’s slowly dawning on people, both academics and students, that marketisation has to be opposed.
We’ve seen recently government’s plans for making students choose which university to go to on the basis of the fees paid. This is just another example of market competition which has to be stopped .” 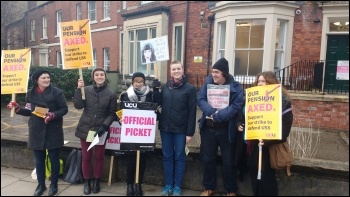 Around 500 staff, students and supporters joined the demonstration and rally organised by the UCU to mark the first day of their national strike action over attacks on pensions. 150-200 strikers turned up to help picket, with seemingly every one of the tens of entrances to the university covered by at least a couple of pickets if not half a dozen or so.

Notable was the number of younger academics joining this strike, many of whom are on short-term or other insecure contracts. While many had struck during the ‘Sacker’s Charter’ dispute last year, many others were today picketing for the first time.

A key factor in this has been the huge student support at the university. Hundreds of students have signed petitions, including one initiated by Socialist Students, critical of the Leeds uni vice-chancellor’s stance of not doing anything about the dispute, alleging that he has ‘no influence’. On the picket lines many staff commented that the VC, a former head of HEFCE, always brags about how much influence he has.

This position has been combined with very hostile emails to students and staff over the dispute, which have proven counterproductive. This huge support has undoubtedly given staff a huge boost.

The strike also saw tremendous solidarity from the local trade union movement, with local trade union activists joining picket lines and banners from Leeds uni Unison, PCS and Leeds TUC being among those present on the strike rally demo.

Socialist Party members spent the morning visiting picket lines and discussing the action with strikers. We distributed copies of our strike bulletin and sold a dozen copies of the Socialist. We also helped with the success of the strike rally by lending UCU our PA system, a vital necessity given the huge numbers in attendance. 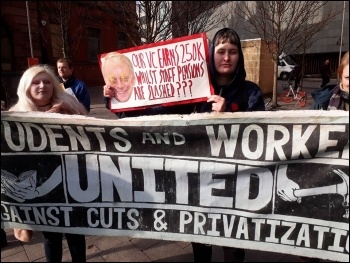 Vibrant pickets dotted the city centre as UCU members posted sentry at all entrances to Newcastle university. I spoke with workers determined not to let the pensions assault erode the conditions of their careers further into precariousness.

Off-the-scales public support arrived as bus drivers and motorists sounded horns with each change of traffic signals. Student mobilisations provided solidarity from the next generation which would suffer under pension ‘reforms’ amounting to little more than retirement savings accounts to be gambled on dodgy companies like Carillion. 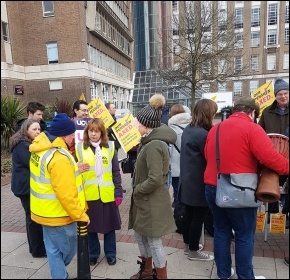 The UCU strike has been very large across Glasgow and Strathclyde universities. There were pickets all over Strathclyde’s sprawling campus and over 100 staff and students picketed the main gate at Glasgow university on Thursday. Students turned out to support to support pickets on Friday afternoon as well.

Hundreds of staff and students came out for a city centre rally on the first day, marching from both campuses. UCU pickets also supported the council workers’ trade union protest later that day at the council’s budget setting meeting.

The Strathclyde UCU branch is participating in a “teach in” on fighting austerity, in the students’ union premises. Pickets told us the deputy principal at Strathclyde had emailed students saying the strike would have no impact but it seems students are coming out in support.

Adam, a UCU picket at Glasgow university, told us: “It’s interesting to see the vice chancellors and university bosses divided. Even ours says there should be negotiation. But we need to keep the pressure on.” 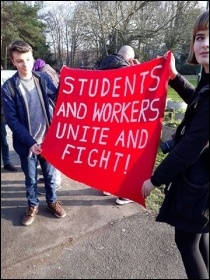 At the University Of Sussex, students joined staff on picket lines across the campus in an enthusiastic display of solidarity, before marching through the university buildings, calling on those still in lectures to join them.

After speeches by lecturers and students, the strikers moved onto the road at the campus entrance to block buses from coming on site. They were successful and the bus company agreed not to send any buses for the duration of the action, and the vice chancellor even came out of his office to “negotiate”.

However, he was evasive and refused to give any satisfactory answers to the questions asked by those present, on the university’s apparent disregard for the demands of its staff.

Over the coming weeks, the pickets will continue and there will be various teach-ins taking place, organised by the lecturers.

The first two days of strike action gained strong support at the University of Manchester with all teaching buildings covered by well-attended picket lines. There was a large rally on the Thursday with speakers expressing the anger felt by university workers at the planned destruction of the pension scheme and the increasing marketisation of education. Students brought solidarity greetings and also handed over money they had raised for the strike fund.

Following the picket lines on Friday, UCU members marched along with students and supporters to a planned meeting at nearby Manchester Metropolitan University Students’ Union where new universities minister, Sam Gyimah, was due to speak.

A lively and noisy protest was held outside the building which then moved into and occupied the bar adjacent to the meeting hall. The minister was forced to come out and address the protesters and was faced with a barrage of angry questions about not only the pensions scheme, but higher education in general. Unable to answer the points being raised, he retreated back into the meeting hall to chants of “Tories out!”.

This version of this article was first posted on the Socialist Party website on 23 February 2018 and may vary slightly from the version subsequently printed in The Socialist.

Refuse to be cold and poor any more: step up the...