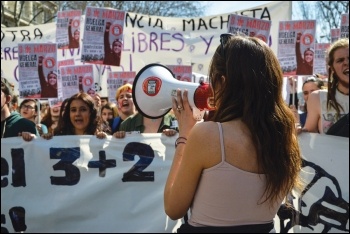 Women's oppression is far from beaten. The headlines can often seem grim. But, following in the footsteps of generations of women and workers before, the struggle for women's liberation is alive and well. See our International Women's Day statement, 'Capitalism oppresses women - fight for socialism'.

Women's income inequality is worst in construction, followed by finance, according to figures reported to the government's pay gap website.

Over 85% of companies pay women less than men, Financial Times analysis has found.

Even in industries which employ more women than men, such as the public sector, women earn less. The majority of women work for companies with a pay gap of more than 10%.

As well as campaigning against sexist attitudes in society, the Socialist Party fights for free childcare and education, genuinely affordable housing, and a real living wage for all workers.

There were 95 women murdered in England, Wales and Northern Ireland in 2016 according to Women's Aid. Of these, 86 died at the hands of a current or former partner or male family member, says its 2017 Femicide Census.

Figures collected by Counting Dead Women suggest a woman was killed by a man every 2.6 days between January and September in the UK. In the year to March 2017, 1.2 million women and 713,000 men were victims of domestic violence says the ONS.

Socialist Party members are playing leading roles in ongoing campaigns to rescue life-saving women's and children's services from Tory and Blairite austerity. We have a proud record of combating domestic violence, including launching the Campaign Against Domestic Violence in 1991.

One in ten working women currently harassed in Australia

One in ten women under 40 in Australia are experiencing ongoing sexual harassment in their present job.

A University of Sydney study found highest rates among workers with disabilities, ethnic or cultural minorities, and students.

Less than a third of the women believe they get equal treatment at work. A third also feel their boss treats them without respect.

Comments in the survey include one woman who, following a meeting with a doctor, found herself labelled a "tasty little bitch." And a legal worker describes a magistrate instructing her to "prove to me you're more than blonde hair and blue eyes."

The study comes after sexual harassment and exploitation scandals unfolded at the United Nations, Oxfam and Save the Children. 'Non-governmental organisations' are just as unaccountable as private companies and the capitalist state.

Supporters of Militant, forerunner of the Socialist Party, led a landmark strike against sexual harassment at the 'Lady at Lord John' store in Liverpool in 1983. And just last year, Woolwich Ferry workers in south London struck and got a sexist manager suspended.