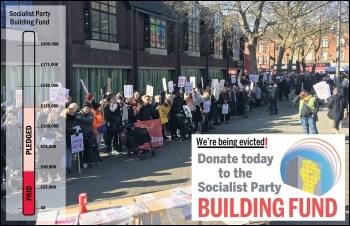 Six hundred people turned out to rage against the land grab by sell-out Blairite councillors and greedy corporations in Waltham Forest, east London, on 24 February. We marked out the space in Walthamstow square to be stolen in this scheme and marched round our square to the sounds of a brass band chanting: "Homes for families, not for profit!"

As the date of the square occupation drew near, newspapers and television stations contacted us. We went to Millbank Tower in central London to be interviewed on Russia Today. We found out that tenants of Millbank Tower were up for eviction! A luxury hotel and flats beckon, yet again, on the banks of the Thames.

All areas of society are facing capitalism looking to land and property for short-term speculation. At our expense.

It is in this context that the Socialist Party faces our own eviction from offices that we have stayed in for 18 years.

The Socialist Party has launched a building fund to appeal to the labour movement to assist in finding new headquarters in London. The pushing out of our party from the capital city is an attempt to push national working class resistance out of London. We can't let this happen.

Resist the evictions! Keep Marxism in the belly of the beast. Donate today!