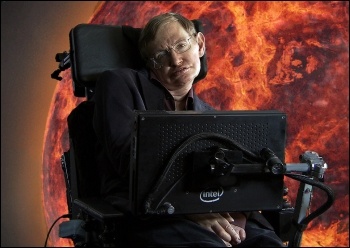 Before Stephen Hawking wrote 'A Brief History of Time', few scientists had attempted to bring to the ordinary reader such a detailed and complex introduction to the universe emerging in front of scientists' frankly astonished eyes.

An intimate sense of confidence in the reader, a lack of that condescension that oozed from some of the available popular science programmes and books which often hid behind a veil of frustrating metaphors - it was firstly this accessibility that gave Hawking a position of respect among such wide layers of the public. He appeared on many TV shows, like the Big Bang Theory and of course The Simpsons.

Hawking's contribution to the scientific revolution that was gathering at the time in 1988 arose from his remarkable combination of the world's two most powerful and yet most esoteric theories of the universe.

Both Einstein's general relativity and quantum mechanics were notoriously difficult subjects. One is focused at the subatomic level, the other at the grandest scales of the universe.

At the time, the idea that time could have a 'history' - that it was a material thing, not some abstract entity as Newton, following the idealist Plato, had believed - was mind-blowing. And that therefore the universe itself had an evolving history beginning with the Big Bang, instead of existing for all time, was highly controversial.

But in 1992, the 'smoking gun' cosmic background radiation was finally confirmed. Cosmologists breathed a sigh of relief and the Big Bang theory became front page news.

Hawking's popularity was enhanced because he championed many important social issues. In 2005, "Britain's most famous scientist, Stephen Hawking, condemned the US-led invasion of Iraq as a 'war crime' and said it was based on lies."

More recently, his understanding of events failed his former radicalism. On Jeremy Corbyn, he granted "his heart is in the right place and many of his policies are sound," but sadly called on him to step down.

And he backed Remain in the EU referendum, stemming from an understandable fear of attacks on science under Tory rule - attacks which the neoliberal EU has aided rather than held back.

"Everyone can enjoy a life of luxury if the machine-produced wealth is shared, or most people can end up miserably poor if the machine-owners successfully lobby against wealth redistribution." Socialists would add that the way to guarantee this is to take the wealth and machines out of the hands of the capitalists.

And, suffering from devastating motor neurone disease and given just two years to live at the age of 21, he repeatedly defended the health service. Most famously when US newspaper Investor's Business Daily said Hawking "wouldn't have a chance" in Britain in the care of the NHS.

Hawking's robust response has been used ever since by those campaigning for a fully funded public health service: "I wouldn't be here today if it were not for the NHS."