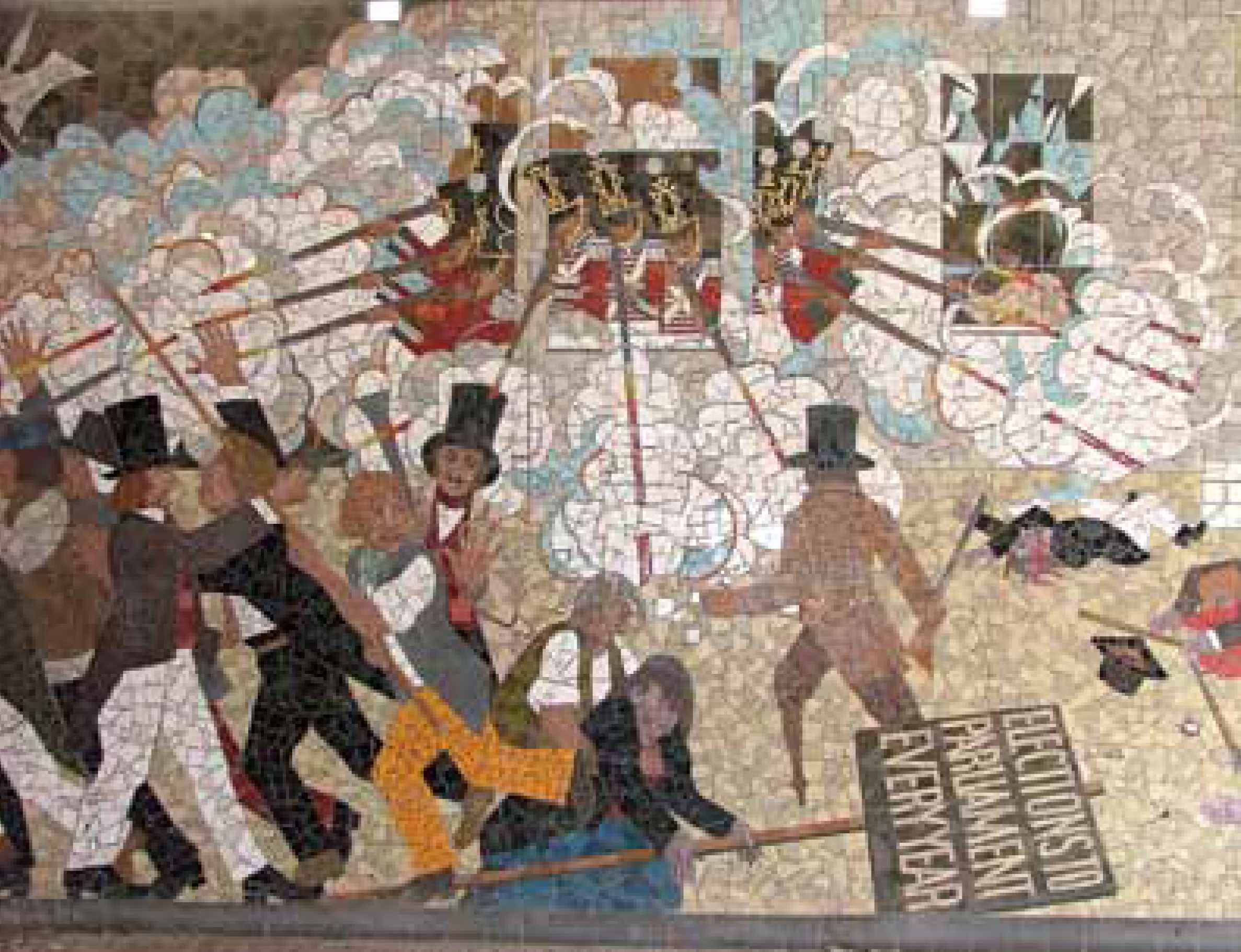 I agree with much written in the editorial of the Socialist issue 984, ‘Corbyn’s customs union dividing line: now stand firm for pro-worker Brexit‘.

What Corbyn is posing is a customs union that works for workers, and it has put May on the back foot.

However, as the quoted right-wing Labour MP Frank Field makes clear, the EU will not want to allow it on those terms.

The editorial could have been clearer in stating that the only way Corbyn is going to achieve his terms is by leading a mass movement and linking up with workers across Europe.

Any socialist government would at first have to make trade agreements with individual capitalist countries, potentially including a sort of customs union depending on the global situation.

But depending on the response of workers in other countries, those governments may not be in a position to force damaging terms.

They may even be forced into some sort of arrangement with a socialist government which could boost the workers’ movement.

Chris Fernandez was TUSC agent in the 2016 Derby City Council elections. He was given an unjustified and vindictive sentence of 15 months’ imprisonment after being found guilty of ‘electoral fraud’.

I visited him at Nottingham prison earlier this month. He has had difficulty getting the Socialist as it was not on the “approved list”! But he protested and will be receiving it.

Chris is staying strong but is currently confined to his cell for about 22 hours a day. He looks forward to letters from supporters.

He has moved to E wing at Nottingham prison, so his new address is below. If people want a reply please enclose a stamped addressed envelope.

The usual Blairite suspects – Yvette Cooper, Hilary Benn, Ben Bradshaw, Pat McFadden and Chris Bryant – were part of the gang who offered their support to Theresa May’s jingoistic stance on Putin’s Russia, while lining up to yet again plunge the dagger into Jeremy’s back. May gushingly thanked Cooper for her support.

Jeremy’s crime? He suggested a little more evidence should be available before drawing the conclusion that Putin – plunderer of state-owned Russian resources, and friend of the Russian oligarchs who contribute to the Tory party – should be found guilty.

The howls of outrage from the right wing are similar to the attacks on those who dared to question the decision to invade Iraq.

Remember Jack Straw’s slur? We were appeasers comparable to those who sold out Czechoslovakia to Hitler at Munich in 1938.

The whole world now stands aghast at the turmoil in the Middle East which was triggered by the catastrophic decision to support the warmonger in the White House and invade Iraq.

Socialists don’t need any lessons about Putin’s gangster state from the Tories who celebrated the avalanche of privatisation and plunder of state resources which followed the collapse of Stalinism. The Russian working class were reduced to dire poverty as a result.

Some Corbyn supporters argue that mandatory reselection is not necessary as the Parliamentary Labour Party now accepts his leadership. This stance of the Blairite MPs again makes nonsense of that contention.

Labour’s Blairites are, of course, hypocrites of the highest order. Their embrace of capitalism means they always end up putting big business before human life, whether the business interests are British or Russian.

Take, for instance, arch-Blairite Lord Mandelson, who is the chairman of the strategic advisory firm Global Counsel.

Last week the Financial Times reported his group had just “won a contract to advise” Russian energy company En+, which it said was owned by “Russian oligarch Oleg Deripaska.”

Here you might observe that the former chief operating officer for En+, Vladimir Polin, is presently the senior vice president of operations for the mining company Polyus Gold.

Until recently a long-serving board member of this Russian mining company was the immensely influential Tory fundraiser Patrick Meade, 8th Earl of Clanwilliam.

Meade is an aristocrat who also hobnobs as an advisor to Oracle Capital Group, where he has worked alongside Blairite hero David Blunkett – now Lord Blunkett – and Roger Munnings.

Munnings is a gentlemen who refers to Putin as a “hero,” and is employed as chairman of the Russo-British Chamber of Commerce and a leading board member of Mandelson’s old haunt, the Russian investment firm Sistema.

Such ruling class powerbrokers, whether they be Tories or Blairites, represent an entirely different type of politics to that of Jeremy Corbyn.

Unless Corbyn prioritises reforms that can transform the Labour Party into a democratic, working class organisation – completely committed to fighting for the needs of the many – his programme will most likely remain unrealised, even if a Corbyn-led government comes to power.

The strike in universities might have won over a surprising late convert to trade unionism.

In the 1980s Patrick Minford served as Thatcher’s economic adviser as she ripped up the rights of trade unions and embarked on a privatisation spree that damaged British capitalism’s economic strength and exposed our public services to profiteering private companies.

But pickets at the Business School at Cardiff University, at which Minford is a professor, have been wondering why, unlike in previous strikes, Minford hasn’t been seen crossing the picket line.

Strikers say he’d come in to work even on his day off just to theatrically break the strike.

Just like universities across the country, at Cardiff there are more pickets, with more people on them, than any strike in living memory – and the daily strike rallies are bigger than ever too. Could even Patrick Minford be a silent supporter?

Only cynics would say May’s defence of the House of Saud is to do with securing more lucrative deals for British capitalists – arms sales to Saudi Arabia since the start of the devastating war in Yemen in 2015 have amounted to $6.4 billion.

But May’s attempt to defend the indefensible is curious. She maintained that Saudi cooperation with the British state had “saved the lives of potentially hundreds of people in this country.”

However, this ‘fact’ doesn’t hold up to scrutiny – not least because many global jihadist organisations, which have killed hundreds of British citizens, derive their ideology from the reactionary Wahhabi movement in Islam, based in Saudi Arabia.

The absolute monarchy of the House of Saud has always coexisted with fanatical Wahhabism, despite the Saudi ruling clique’s penchant for ‘western decadence’ and notwithstanding bin Salman’s recent public criticism of ‘Islamic extremism’.

The Saudi state has spent over $100 billion of its petrodollars exporting Wahhabism globally over the last 30 years, as estimated by the 2008 Channel 4 documentary The Qur’an, including financing groups such as al-Qa’ida, al-Nusra and the Taliban.

I wonder if the queen mentioned this over tea with the crown prince? 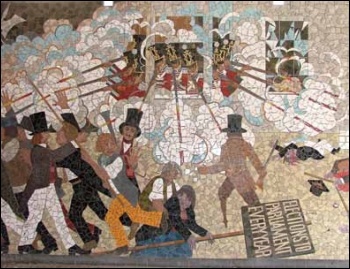 Part of the Newport chartist mural depicting workers struggles which was smashed up by council developers, photo Dave Reid   (Click to enlarge: opens in new window)

In an essay in BBC History Magazine in March to accompany Radio 4’s series ‘British Socialism: The Grand Tour’, historian Jon Lawrence charts the formation of the Labour Party and its roots in 19th working class movements including Chartism.

In the article Lawrence gets a few things wrong. This includes his claim that Chartism, the world’s first working class movement, which demanded votes for all men over 21 and working class political representation, was purely interested in “incorporation into the political order, rather than destruction of that order” and that “Marx and Engels misread Chartism.”

Maybe he’s never heard of the Chartist rising in Newport in 1839, one of Britain’s last large-scale armed rebellions against the political order. 7,500 Chartists and workers marched on the city.

Among their intentions was to seize power in Newport, Cardiff, Abergavenny and Brecon, declare a “Silurian” workers’ republic, and appeal for support from workers in England and Scotland.

Workers’ militias had been formed and drilled under the bosses’ noses. A rough economic programme was discussed, including taking over the mines, iron works and banks.

And preparations were also made in London, Yorkshire, Lancashire, Newcastle, Birmingham, the West Country and Dundee – anticipating joining the insurrection.

Unfortunately the rising ended in bloody failure after the marchers lost the element of surprise and found troops waiting for them at the Westgate Hotel.

But the event shows that, although there were some in the Chartist movement who wanted “incorporation,” the rank and file wanted to go much further.