Editorial of the Socialist, issue 984 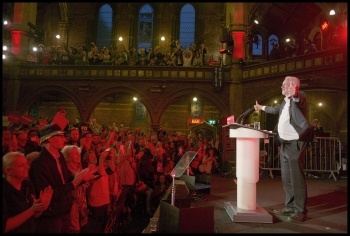 What does Jeremy Corbyn mean by a new tariff-free customs union and could it be achieved?, photo Paul Mattsson   (Click to enlarge)

"Those who say that the European Union is a neoliberal plot are, of course, largely right" admitted financial journalist and billionaire Simon Nixon in the Times last autumn.

He went on: "Any single market that allows free movement of capital and people by its very nature pits country against country, region against region and town against town... since 2008, the downside of this competition for capital and labour have become clear."

The defenders of capitalism usually take more care to try to hide the reality which the Socialist has long exposed - that the present EU is a bosses' club, crafted to serve the interests of the top corporations and super-rich.

Britain's capitalists were among its leading architects and most of them have made it clear that it's against their interests to leave it, so they apply great pressure for a Brexit that would mean staying in the EU Single Market and Customs Union.

Doing their bidding is Labour's right wing, including most of its MPs, led by shadow Brexit secretary Keir Starmer, who has made no secret of pushing for a pro-capitalist 'soft Brexit'.

A section of Labour's right are trying to push Labour's shadow cabinet to embrace the single market, as 80 Labour MPs, council leaders and others called for in a statement shortly before Jeremy Corbyn's Coventry speech on Labour's approach to Brexit.

Corbyn's speech was carefully crafted to try to ease workers' fears on the possible loss of jobs and disruption to trade that the Tory Theresa May government applying a 'hard Brexit' could lead to.

In essence, Corbyn sought to oppose the present pro-capitalist EU Customs Union with the idea of one that would be in the interests of working people.

He stressed Labour's priority as being "to get the best deal for people's jobs, living standards and the economy" and rejected "any race to the bottom in workers' rights, environmental safeguards, consumer protections or food safety standards."

The key part of the speech was the new departure of placing a dividing line between Labour's position and the Tory government's, by declaring that Labour "would seek to negotiate a new comprehensive UK-EU customs union to ensure that there are no tariffs with Europe and to help avoid any need for a hard border in Northern Ireland."

This has put May in an even more difficult position than she has already been in, raising the prospect that a number of pro-EU rebel Tories could help inflict a big enough defeat on May to threaten her leadership.

The first reaction of big business representatives was one of relief that the alarming prospect of massive queues for goods at cargo terminals that has been warned about could potentially be averted.

However, what does Jeremy Corbyn mean by a new tariff-free customs union and could it be achieved?

To address the many workers who voted Leave in the EU referendum out of anger against the establishment, austerity, globalisation, and a distant, unaccountable EU, he said that he would "not countenance a deal that left Britain as a passive recipient of rules decided elsewhere by others" and that the UK would have to have a say in future EU trade deals as part of a new customs arrangement.

He also gave assurances that Labour would "seek to negotiate protections, clarifications or exemptions where necessary in relation to privatisation and public service competition directives, state aid and procurement rules and the posted workers directive."

This was a speech designed to appeal to potential Labour voters, whether they voted Leave or Remain. By raising the aim of keeping trade tariffs at bay but adding the caveats and conditions that he did, Corbyn put a position that could be used to challenge the EU leaders in Brussels on their anti-working class policies and expose their motives if they reject it. 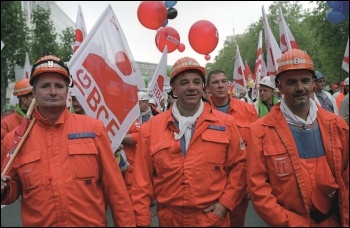 German trade unionists marching against EU austerity in Brussels. Socialist internationalism means solidarity with workers and their organisations, not the bosses and their, photo Paul Mattsson   (Click to enlarge)

Understandably, the reaction in the labour and trade union movement and in the working class generally has been mixed, with a layer expressing relief, and others fearing it is a further retreat, under pressure from the right.

Before Corbyn's speech, right-wing Labour MP Frank Field, who supported Leave, said that he would be "surprised and disappointed" if Corbyn proposed to keep Britain in a customs union after Brexit.

But after the speech he called the position "marvellous" on the basis that "Jeremy knows they won't ever let us have an agreement like that".

However, there are clearly doubts among many working class people who voted Leave - as expressed in reports in the media - over whether Corbyn is reneging on his promise to abide by the referendum result.

This doesn't necessarily mean though that they won't vote Labour in the next general election. There were many points in Corbyn's speech aimed at differentiating his proposal for a customs union from the present pro-capitalist one.

Coupled with his manifesto policies on housing, tuition fees, the minimum wage, nationalisations, etc, he can gain enough support for a victory, as the surge towards Labour in the last general election (which came after the EU referendum) indicated is possible.

Whether Corbyn's new position turns out to be unfavourable to the working class will depend on his subsequent positions and actions - in particular how firmly he and those around him take a stand in workers' interests and mobilise mass support behind that, and counter the pro-capitalist positions of the Blairites.

Labour's right wing obscures the class nature of capitalist society, the fact that the ruling class - whether inside or outside the EU - has diametrically opposed interests to the overwhelming majority.

UK corporate profits reached an all-time high in the fourth quarter of 2017, yet austerity continues for workers and inequality goes on rising.

The right threatens that Corbyn won't be able to deliver his anti-austerity agenda without staying in the single market, and, they say, he shouldn't move away from what they describe as the EU's protection of workers' rights, the environment and 'social justice'.

It is true that there are many EU laws concerning standards and workers' protections that should be kept in UK law and improved on.

But the driving force of the Single Market is to promote the interests of big business across Europe in its task of exploiting workers and competing for markets.

EU rules have included the posted workers' directive which enables bosses to use migrant labour to undercut existing wage levels.

The City AM paper spelt this out when on the morning of Corbyn's speech its front page headline screamed: "Corbyn's Red Brexit. Labour backs customs union but wants freedom to nationalise core industries". And in its editorial: "His vision of a largely state-owned, state-run economy is not compatible with membership of the single market. It never has been."

Also, City AM alluded to the class nature of the EU: "Corbyn's Euroscepticism has its roots in the honourable left-wing critique of a corporatist club run in the interests of capital, not labour.

"Looking at youth unemployment rates in bailed-out southern states, who could disagree?* The challenge for Corbyn... is that when it comes to Labour MPs, hard-left criticism of the EU is a position of the few, not the many."

Corbyn's present manifesto doesn't contain the extent of nationalisation raised as a spectre by City AM and much feared by big business, but he was absolutely right to argue for confronting "the growing concentration of unaccountable wealth and power in the hands of a tiny corporate elite" and to say: "In or out of the European Union we have to deal with the reality of market failure and austerity."

This should be done by taking a clear, firm stand against the anti-working class nature of the EU, combined with bold socialist proposals for the removal from effective power of that 'tiny corporate elite'.

It would mean extending the Labour manifesto to include public ownership of the banks and largest companies, under democratic workers' control and management.

It is also essential for the left Labour and trade union leaders to make an international appeal to workers throughout Europe to demand similar steps themselves, in their own interests and those of their class across the continent and beyond.

Corbyn and McDonnell shouldn't fight this battle on their own, but must link up with the workers' movement across Europe for a common anti-capitalist strategy and socialist road.

Write off the 'debts' to multi-billionaire investors! Break with the EU capitalist treaties! And build a socialist alternative based on the democratic planning of production and society, for a decent future for all in a voluntary socialist confederation of European states.

* This question was in brackets in City AM's original text.