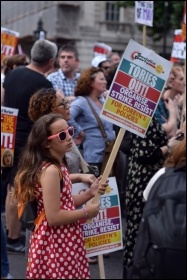 This Easter break there is one major news story that should dominate all the headlines. Holiday hunger.

How much horror for working class people and their kids is summed up in those two words? In the weeks when children are without school meals charities report that pressure on food banks doubles.

Why isn't this story on every front page, rather than false antisemitism claims? Why is it not at the top of the news? Why is the entirety of society not consumed with trying to urgently solve this problem?

Because we live in a society where pro-capitalist politicians act in the interests of the richest, defending a system of gross inequality whose symptoms include hungry kids, homelessness and NHS crises. The 10% richest households own almost half the country's wealth while the poorest half of families own only 9%!

The term 'holiday hunger' was coined in the era of austerity to summarise the poverty inflicted on families by pro-capitalist politicians who bailed out banks saying there is no alternative. There is. Austerity means choosing capitalism, which can only exist by driving down living standards. Socialism would mean democratic planning of resources to improve everyone's life.

These and many other examples of the problems that beset working class and middle class families are the results of political decisions, of the Tory governments, and of the Blairites in government and Labour councils who have chosen not to use the power they hold to resist austerity and privatisation.

Instead our airwaves have been dominated by attacks on Jeremy Corbyn. Why? Because the popularity of his anti-austerity message shows that people have had enough. Because a swing to Labour at the local elections on 3 May is predicted. Because the Blairites who dominate the Parliamentary Labour Party and the Labour councils fear for their future, having backed and implemented Tory austerity.

It is regrettable that Jeremy Corbyn has not yet acted decisively to clear these pro-capitalist class elements out of the Labour Party. Now they are attacking again, aided and abetted by the Tories and the capitalist press. Introducing the right to democratic mandatory reselection so the members can clear them out is an urgent part of fighting for a working class and socialist Labour Party that can give a political voice to the fight against austerity.

Socialist Party members and other campaigners are standing as anti-cuts candidates in the Trade Unionist and Socialist Coalition against right-wing Labour councillors to help turn Jeremy's anti-austerity message into action.

The right-wing press has gone into overdrive in its false claims of Jeremy Corbyn's antisemitism and racism. The Sunday Times produced what it called a 'bombshell dossier' - it was more like a damp squib rolled in fake news and topped with a dollop of hypocrisy.

The Socialist Party condemns antisemitism and all forms of racism and discrimination. Unlike Murdoch and the Tories, we, Jeremy Corbyn and the labour movement have a record of fighting racism.

Antisemitism is certainly prevalent on the far right, and it is socialists and trade unionists who are at the forefront of countering it, not the Tories or the Labour right.

In the 1990s our predecessor, Militant, was instrumental in shutting down the headquarters of the racist and antisemitic British National Party.

The Tories represent the capitalist system, which is intrinsically unequal and racist. For example, this week it has been revealed that the Home Office is upping the pressure on desperate asylum seekers to return to the war and torture they are fleeing.

Unfortunately Jeremy Corbyn has not been aided by the heads of Momentum, the organisation supposedly set up to back him. Its leadership has produced a statement which gives legitimacy to the false claims.

Christine Shawcroft, one of Momentum's directors, resigned from Labour's national executive committee and allowed Blairite Eddie Izzard to take a seat, strengthening the right wing there.

These events are only a small indication of the attacks that a Corbyn-led government would face. Instead of retreating, Jeremy should call for a mass demo against austerity and all forms of racism and to get the Tories out, with a plan with the trade unions to follow it with united strike action. The university workers in UCU have shown the way, and willingness to fight, that exists.

Corbyn should show his determination to stand firm by instructing Labour council candidates to commit to no more cuts or stand down now for emergency replacement by trade unionists, socialists and campaigners committed to defending working class families and young people. This would show up the lies for what they are and start to challenge austerity and its authors.