The 24-hour walkout has already forced management to agree to talks. The union has suspended the strike planned for 24 May as a result.

Dagenham strikers want pay parity. Just seven miles down the A13, Tesco distribution workers at Thurrock are on £1.38 an hour more.

Around 50 strikers cheered and shouted on each of the shift-change picket lines at 10pm, 6am and 2pm. Some drivers refused to cross and joined the protests.

Socialist Party members got a friendly response supporting the picket lines. We ran two campaign stalls backing the strike in Dagenham too.

The picket lines are youthful and enthusiastic. Many strikers have not previously been active in their branch of the union, Usdaw. More are now talking about getting stuck in. 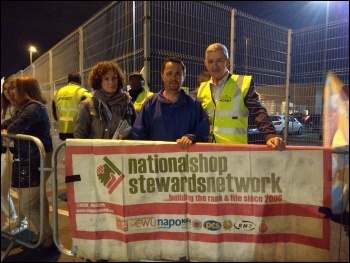 Tesco has thrown money into this battle. On top of the guards and fences they have tried to bus in agency workers to cover each of the directly employed strikers.

Agency workers are organised in a different Usdaw branch. Some expressed frustration to us that they weren't included in the dispute.

But with all that strike-breaking cash, why not just meet the pay claim? This is Usdaw's first official strike in seven years. Management doesn't want retail and distribution workers making a habit of standing up for themselves.

But with Socialist Party member Amy Murphy now president of the union, elected on a platform including backing industrial action, supermarket bosses' woes are just beginning.