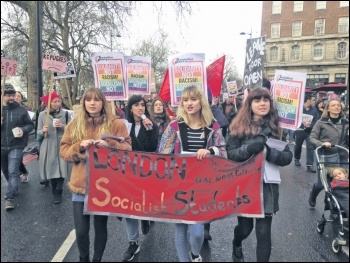 On Friday 13 July, I and many other school and college students will stand among thousands protesting on the streets against Donald Trump.

Together we will stand against the capitalist system Trump represents, the system of sexism, racism, homophobia, war and poverty that plagues so many today.

On 13 July we can all unite on the streets of London and other cities around the country. We can show Trump how young people stand with the working class of the US and the world.

We see his doomed America. Without healthcare, education, justice - without a future. The super-rich want to doom us: we say it's their system which is doomed.

I once thought that bigotry would be a thing of the past by now. That the horrors of war and the terror of nuclear conflict would have been a lesson learned.

But capitalism's inability to promise a future to the working class has led to an openly bigoted demagogue being in control of the wealthiest and most powerful country in the world.

He cares more about his ego than human lives. We joke about him and Kim Jong-un comparing the sizes of their 'nuclear weapons' with a ruler in the boys' toilets, because it seems absurd when you take in how much devastation it could cause.

Fellow right-wing politicians, including Boris Johnson, present him as a peacekeeper, as someone worthy of a Nobel Peace Prize. But this reckless warmonger was the one who escalated recent nuclear tensions with North Korea!

He has inflamed the Middle East through his moving of the US embassy to Jerusalem. This while peaceful protesters are shot dead on the Gaza border, including a 14-year-old boy.

He talks himself up for calling peace summits - then backs out of them! His impulses put countless lives at risk and vanquish hopes of peace for many.

But many see the need to fight back through their anger.

Now the demagogue wants to visit London. Join me and thousands of others on 13 July. Let your voice be heard, and be part of starting to change history.

If you have school or college on that day, organise a walkout. Show solidarity with workers, young people and the oppressed that Trump and his fellow billionaires have persecuted. Show Theresa May and the Tories that young people and workers do not accept their bigoted capitalist agenda either.

Together we are more powerful than Trump. Together we can bring hope to those who need it most, and fight for a world free from inequality and division: a socialist world.