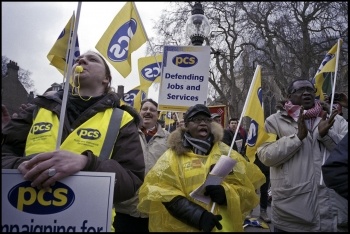 On 14 June senior managers in the Department for Work and Pensions (DWP) caved in to the PCS civil servants' union's demands that they pay the contractual 'employee deal' pay rise on time in July.

This retreat came one week after DWP had made the announcement that it would be delaying the pay rise for all staff 'HEO' grade and below. The official excuse given was that DWP had not received treasury remit guidance, though several senior managers also tried to blame the continuing negotiations with the union.

In reality, the employer demonstrated just how out of touch it is with staff. The employee deal, negotiated by PCS in 2016, saw all staff who opted in break the 1% pay cap, with some 'AA' to 'HEO' grade members receiving pay rises of over 20% across four years.

At the time, with the pay cap extending across the entire public sector, the deal was a significant offer for those members in DWP and was overwhelmingly accepted in a members' ballot to address the long standing lack of pay progression in the department.

For the employer to delay paying what they owed even by a month was absolutely unacceptable and members reacted vociferously. Within hours, well attended car park meetings were held across the country. PCS members showed their displeasure on the staff intranet and in calls with senior managers. This shows what can be done when union members are organised and prepared to fight.

This question of pay is absolutely crucial. The public sector pay cap has been abolished for the vast majority of the public sector. NHS staff, council workers and prison officers have all received offers of a pay rise over 1%. This is progress, though far from what could have been achieved if the largest public sector trade unions had adopted a united, campaigning approach to busting the cap.

The UK civil service is one of the last areas where this hasn't happened. The government has insisted on maintaining the 1% cap for 2018-19 and has insisted that any pay rises be paid for within existing budgets.

Now the government is trying to force civil servants to accept job losses and office closures as a trade for any pay rise above the cap. With real wages down by as much as 20% since 2010 and more than 100,000 jobs already gone, this is not acceptable.

The employee deal addressed the progression issues in DWP pay for significant numbers of AA-HEO grade staff. But it is clear to our members that we cannot afford the cost of living rises to wipe this out.

We also need to address the pay for everyone including members who have opted out, those who were already on or near the max of the pay scales, those not on DWP terms and conditions and all members 'SEO' grade and above. All our members need a 5% pay rise with inflation running at 3% and we will fight for extra resources from the Treasury to fully fund 5% for all.

This pressure on wages, where surveys show civil servants relying on food banks at the end of the month, was why PCS annual delegate conference voted overwhelmingly to move to a statutory strike ballot on pay. Union members decisively showed their rejection of the pay cap in a consultative ballot last autumn, which saw 99% say the government should bust the cap. The government continues to delay and so the next step is to prepare for industrial action.

The Socialist Party, acutely aware of the anti-union laws and the new threshold that requires over 50% of all union members to vote in order for a ballot to be a legal mandate for action, calls on all PCS reps and members to do everything to build turnout and get a massive Yes vote in the ballot.