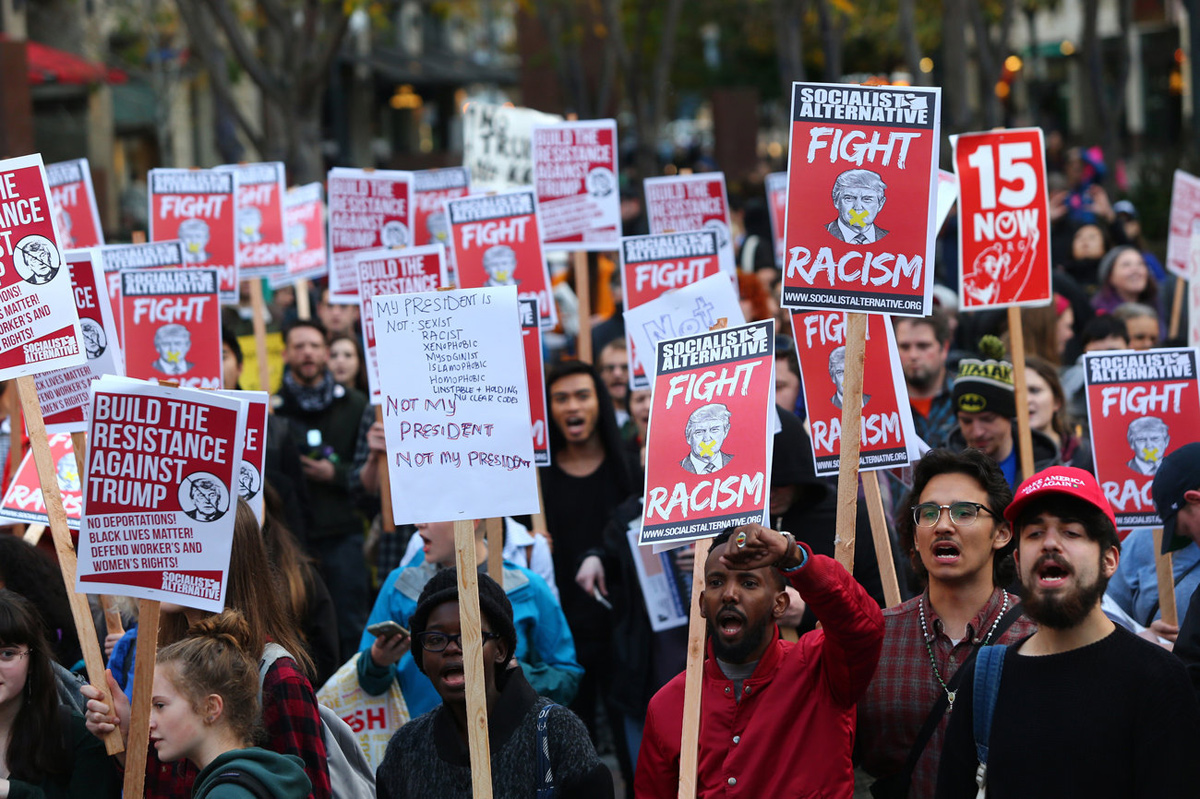 Interview with socialist student activist in the US

US: “We’ve had to build a huge culture of resistance”

In the lead up to the walkouts and protests against Trump’s UK visit, Lily Branchett from Birmingham University Socialist Students interviewed Greyson Arbeider, a student activist in Ohio and member of Socialist Alternative (cothinkers of the Socialist Party in the US). 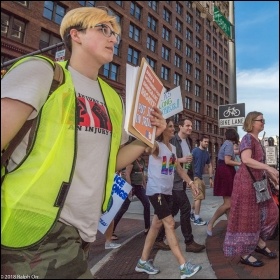 The Trump presidency has definitely affected the political involvement of young people. I’m an example of that. I joined Socialist Alternative right after Trump’s inauguration last year and after the first Muslim ban in January 2017.

It’s created this sense of urgency that definitely didn’t exist before. And a sense that we, the people on the ground, are kind of the last line of defence faced with an unjust administration.

There was this mistaken idea that in the face of an attack on our civil rights the government would be a wall against that. And now it’s clear that the government is perpetuating it and actually creating the crisis.

Do you think the March for Our Lives was a representation of that? What was it like on those protests?

What we witnessed on the March for Our Lives was unlike any other protest that I’ve been to. It was a culmination of decades of consciousness that I’ve actively been a part of. Millions of people, mostly young people, marched around the country for an issue that has plagued us for decades. Our generation is likely to be characterised by the years of ‘active shooter drills’ that we’ve been through for our entire lives.

After the Parkland shooting there was this collective jump in understanding that the government would never put through gun control without extreme outside pressure. And you can see that it still hasn’t happened.

There was also another jump in consciousness – the widespread recognition that the National Rifle Association (NRA) money put behind both Republicans and Democrats is a major reason for their failure to act.

But at the same time, at those rallies, there was extreme pressure from the Democratic establishment to keep the energy of those young people – many who we met were self-described socialists – on safer political ground. A lot of the speeches from the leadership were largely based around the November mid-terms and registering to vote.

But across the country we found crowds of young people who wanted much, much more than that. It was an experience! 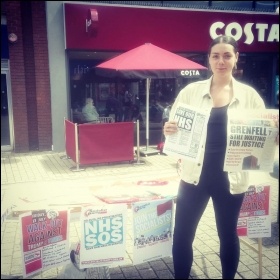 At a local level, what are people’s attitude towards Trump and his policies?

It’s not the same everywhere. But in every major city across the US, even as Trump is now the new normal, revulsion for him and his policies is probably the right word – and it has not ebbed.

When you talk to people on the street you don’t get a casual reaction like “oh yeah I hate the guy”, it’s a physical response. People roll their eyes, they sigh, they run their hands through their hair. It’s like they don’t have the words to comprehend how deeply unsettling the administration is.

But like I said that’s not the case everywhere. We’ve seen over the last year that the far right has been really emboldened around the country. And last summer we experienced the events of Charlottesville that resulted in the death of Heather Hyer [see ‘Neo-Nazi violence in Charlottesville reawakens resistance’ at socialistalternative.org].

Those people have not gone away either. The Trump anti-immigrant rhetoric is like a war cry for them. When people say the country is sharply divided, that’s kind of capitalist rhetoric because we’ve always been divided. But it is true that there is a giant gap between the way most people are leaning versus this right-wing fringe, which is now legitimised by a very right-wing administration.

Do you think the prospects for building socialist ideas have increased since Trump’s election and also Bernie Sanders’ campaign?

Yes, the prospects for building socialist ideas are getting better every day. Under the Trump administration, people don’t know what’s going to be taken away next. Things like universal healthcare and affordable housing are immediately politicised on those grounds. We’ve had to build up a huge culture of resistance to protect reforms like Obamacare.

But in building that resistance it becomes increasingly clear to people that what has been promised in the past by the establishment is not enough.

And people are more and more turning back to the ideas presented by Bernie Sanders’ campaign in the 2016 Democratic primaries, which at the time many centre-leaning people viewed as ludicrous. Now those ideas are really being legitimised in the face of a right-wing administration to create a vision for what we need to fight for in the future.

Who is Alexandria Ocasio-Cortez and what does her election represent?

Alexandria Ocasio-Cortez is a Democratic Socialists of America (DSA) member who won her congressional Democratic primary in New York City in a huge upset over ten-term incumbent Joe Crowley. Joe Crowley is not just any old Democrat, he was the favourite to take over from Nancy Pelosi who is the current Democrat leader in the House of Representatives.

Ocasio-Cortez represents the most popular train of thought on the left following Bernie Sanders – that the Democratic Party must be overtaken by progressives from the inside. But we’ve already seen the reaction of the Democratic Party – they have completely closed ranks, saying that she doesn’t represent a trend and that she never could have won in the Mid-West, which we know to be untrue.

And the Democratic National Committee has already adopted a new rule that would prevent outsiders from seeking a Democratic presidential candidacy. That rule would essentially bar Bernie from running again.

And it’s not unlikely to think they would change the rules again to keep DSA candidates out. Especially as socialist ideas are gaining more popularity. So in these times it’s really crucial that we build independent movements that are capable of moving forward.

Ocasio also represents an emerging kind of politician – one that we’ve already seen demonstrated by Bernie and also by Socialist Alternative’s own Kshama Sawant who was elected in Seattle and Ginger Jentzen who lost by a very close margin in Minneapolis. This type of politician that doesn’t put themselves up for election but their platform.

Ocasio’s supporters weren’t voting for her name, they were voting for her ideas – Medicare for all, fully funded public [state] schools and universities, a universal jobs guarantee, housing as a human right, justice and immigration reform. People were voting for that. Which I think is the most hopeful part.

What needs to happen next in the anti-Trump movement?

The anti-Trump movement up to now has been a movement of sporadic reaction. Because every week there’s a new attack on a minority group or on the working class generally.

Just last week the Supreme Court delivered a big blow to organised labour in the US, called the Janus decision, where basically the US is now open shop. And then Justice Kennedy actually stepped down so he’ll be replaced by a Trump nominee which will carry on Trump’s rhetoric for potentially decades. So much of the energy of the movement has been put into rapid response when this type of emergency occurs.

But it’s also been a movement of reacting because a majority of the emphasis has been on waiting for the November elections where the supposed ‘blue wave’ is going to take the house and senate.

But even if the Democrats succeed in taking them both, which is still hotly contested, there’s no guarantee that will stop the attacks on immigrants, LGBTQ rights, organised labour and other demographics that the administration frequently targets.

So the movement has to move out of the realm of the Democrats towards building independent politics and working towards a sustainable movement for clear demands rather than one of emergency reactions.

How important is international solidarity to the movement?

International solidarity cannot be underplayed. We’ve seen that most recently with the attacks on immigrants. The rhetoric of the right is that it isn’t our responsibility to care for these people and that they’re a drain on the US economy, which we know to be untrue.

The fact is that immigrants from Mexico and central America are fleeing violence that the US stoked in those regions. And as socialists our fight is not just for the American working class but for the international working class.

We’ve been watching the news coming out of the UK about potential student walkouts and even potential labour strikes for Trump’s upcoming visit and… we’re happy! It’s good news for us. The more difficult for Trump things are made abroad, the more we can increase the pressure on the domestic front.