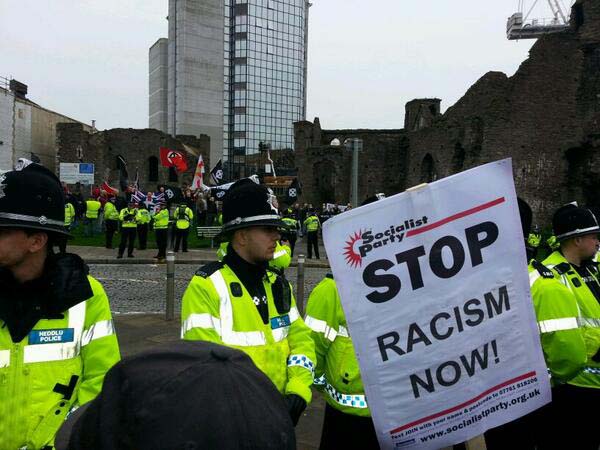 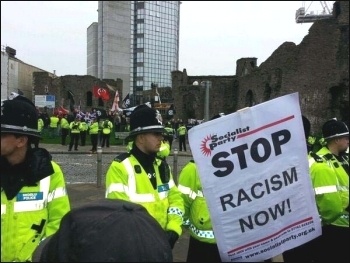 In mid-July the far-right English Defence League (EDL) announced its plan to come to Worcester on 21 July. The intention was to protest against the replacement of the old mosque with a new one, and to divide our community. Only 25 of them made the journey.

The counter-protest, organised by Worcester Trade Union Council, brought together community groups and activists, mobilising up to 300. Our main focus was to occupy the end rallying point of the proposed EDL march. We were determined to stop them handing out leaflets or giving speeches.

What do the likes of the EDL offer as an alternative to endless austerity in food-bank Britain? Nothing! The EDL puts forward no vison for reversing the cuts that destroy people’s lives, has no plan for housing, jobs, education, or vital services, but instead does the dirty work of the establishment by distracting people and misdirecting people’s anger towards their fellow workers.

That is why it is important for workers to mobilise any time racism or fascism rears its ugly head in society.

The EDL supporters were held at their assembly point following a confrontation with a group of Asian young people. With the eventual EDL rallying point occupied by the counter-protest, and the confrontation at their assembly point, the police were not prepared to allow the EDL to march. It was clear that we had won an important victory. The numbers confronting the far right subsequently swelled and eventually the police moved the EDL away and out of town.

All is not over though! They have announced their intention to return on 1 September with a potentially larger mobilisation than previously. Once more Worcester Trade Union Council is organising to make it clear they are not welcome here, expose their lies and attempts at division and oppose them with solidarity and unity.