The recent attempted assassination of Venezuela's president Nicolas Maduro has once again focussed attention on the deepening economic, social and political crisis in the country. Izquierda Revolucionaria (CWI in Venezuela) in the following article explains that Maduro is using his party and the state bureaucracy not in defence of 'socialism' but instead to manage capitalism and retain power. 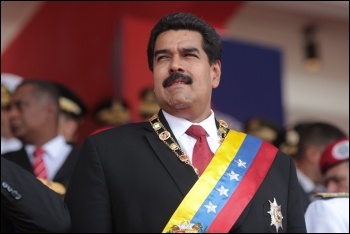 The group claiming responsibility for the attack - 'soldiers of Franela' - are followers of far-right linked military chief Oscar Perez, who died in a shoot-out with the national guard in January, and author of the terrorist attack on the supreme court in June 2017.

The 4 August attack was part of 'operation Phoenix' with the objective of killing Maduro and bringing down the Venezuelan government.

The last 'guarimba' (violent street barricades) episode caused over 100 deaths between March and July 2017. These terrorist methods were one of the reasons for the failure of the opposition offensive and of the MUD's (electoral opposition coalition) attempt to take power.

The 4 August attack took place exactly one year after the government's victory in the constituent national assembly elections. In those elections, while millions of the poorest mobilised to defeat the coup strategy of the right, millions of Chavista (supporters of the late president Hugo Chavez) voters and activists also used them to express their discontent with the capitalist policies of the Maduro government, by organising and supporting critical candidates and demanding a shift to the left.

Since then, the response of Maduro, the state apparatus and PSUV (United Socialist Party of Venezuela - the ruling party) bureaucracy has been to divide, isolate and repress all critical left movements. At the same time it has reaffirmed its policy of agreements with sections of Venezuelan capitalism, following the advice of its international advisers (especially the Chinese government which finances a lot of Venezuela's debt).

He has gifted mountains of cash and 'aid' to the new capitalists born from the ranks of the bureaucracy due to its control over the state, and to sections of the traditional bourgeoisie who have made agreements with the government. He has allowed multinationals from China, Iran and Russia - so-called friends - to make juicy profits thanks to mixed companies and trade deals to exploit our natural resources.

The attempts by critical sectors within the Chavista rank and file and the workers' movement to struggle against this situation have been dispersed.

Demoralisation and scepticism has been generated among wide sectors of the population by the rightward turn. Also, the lack of a united and independent working class party possessing a clear and decisive political programme of demands - and which unites the left opposition to the bureaucracy - represents a grave difficulty.

The PSUV acts as an appendage of the state apparatus, in a similar way to the communist parties of the former Stalinist states (the USSR, etc) - with the difference that Venezuela is not a 'deformed workers' state' based on a planned economy, but a capitalist state based on capitalist relations of production and dependent on the world market to an extreme degree (due to the size of the oil industry).

Maduro and his collaborators have a model to look to: China, which is a clear promotor of state capitalism based on an authoritarian Bonapartist regime (ie the state 'balances' above the contending social classes) and which has broken any link with revolutionary traditions.

Despite Maduro's continuous pompous declarations about socialism and revolution, his policy consists of using the state and party apparatus to manage capitalism and remain in power.

The counterrevolutionary opposition is trying to take advantage of the terrible economic situation and social discontent by launching the so-called 'Broad Front'. However, for the time being they have had no success and their base remains passive and demoralised.

Weak and parasitic Venezuelan capitalism cannot guarantee a dignified life to the masses. The international ruling class presents the paralysis of the Venezuelan economy as the result of 'socialism'.

The reality is that the Bolivarian revolution was not completed. Chavez implemented progressive reforms which raised living standards. But the measures necessary to end capitalism - the nationalisation of the banks, land estates and big companies, and the destruction of capitalist bureaucracy, laws and institutions - were never taken.