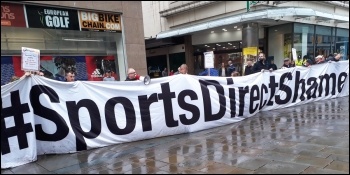 Socialist Party members stood alongside a group of Newcastle United supporters on 26 August, as part of our continuing campaign against billionaire boss Mike Ashley for his despicable treatment of Sports Direct workers and mismanagement of Newcastle United.

Around 200 people came out in support of the demonstration outside Sports Direct in Newcastle city centre, where we heard excellent contributions from three Socialist Party members as well as trade unionists and supporters of the club.

Our message received huge support, especially our demands that the club be brought under democratic control. We demanded that Mike Ashley step down but also emphasised that only by kicking big money out of football can we reclaim the game completely.

We also highlighted the various ways that Ashley has exploited workers in Sports Direct, including massive use of zero-hour contracts, below-minimum-wage pay and the despicable 'six strikes and you're out' policy which forced workers back onto the job despite ill health, for fear of being sacked.

With his purchase of House of Fraser, our need to tackle billionaire bullies like Mike Ashley only grows stronger - we will continue to fight for both workers and fans.