Non-fiction - Striking Back: the untold story of an anti-apartheid striker 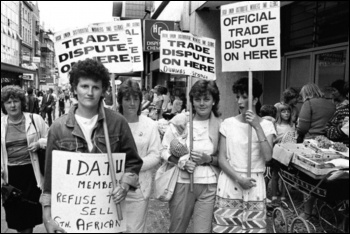 Many books on trade union history are written by those at the very top of the movement. They can often present a picture of the movement that fits with the outlook generated by their high salaries and the corridors of power they walk (see 'Memoirs of a Careerist' at socialismtoday.org).

This is not one of those books. Instead, Mary Manning captures the real experience of working class activists who - through taking part in struggle - can be propelled to the front, with all the excitement, doubts, hesitations and new experiences that can bring.

Manning's story really starts with the Irish Distributive and Administrative Trade Union (IDATU) adopting a policy of boycotting the handling of South African goods in the 1980s, in solidarity with workers over there fighting apartheid.

Far too often, conferences in the trade union movement can adopt policy which is very good on paper, but never gets implemented in practice. This, undoubtedly, was the intent of the majority of the IDATU leadership, which Manning describes as "conservative."

However, the union's general secretary, John Mitchell, was part of the Irish Anti-Apartheid Movement, and duly issued a circular to members instructing them not to handle South African goods. Manning worked in the flagship Dublin branch of Dunnes Stores, which took a hardline position, insisting on selling South African goods.

On 19 July 1984, watched hawkishly by managers, Manning was the first staff member to refuse to sell South African goods - in this case, two grapefruits.

Threatened with dismissal, her shop steward called the rest of the staff out of the store. At first 25 joined them on the picket line, but hesitant about the action, just ten strikers ended up staying out.

Manning captures the highs and lows of the dispute. These include meeting and gaining support and publicity from Desmond Tutu, then just a bishop, on his way to collect the Nobel peace prize. And later, an invite from him to visit South Africa, where the Dunnes strikers weren't even allowed to leave the airport.

Eventually, the dispute was ended by the Irish government banning the import of South African goods - the first ban by a western government.

Manning praises those who stuck with the strike through thick and thin. This includes local IDATU organiser Brendan Archibold. Also South African exile and supporter of Militant, forerunner of the Socialist Party, Nimrod Sejake, who she repeatedly refers to as a guiding figure for the strikers.

Mention is also given to "a few kind supporters from Labour Youth, particularly Kevin McLoughlin," who is now secretary of Socialist Party Ireland.

Although many people offered their support throughout the course of the dispute, several key figures did not stay the course. One of these was John Mitchell, under pressure from the IDATU executive committee. But perhaps initially more devastating to the strikers was the betrayal of Kader Asmal, the head of the Irish Anti-Apartheid Movement.

Manning explains the differing approach: "What separates us, the Dunnes Stores strikers, from Kader Asmal was how we viewed the change process. Kader was an influential, well-respected and educated man who firmly held the belief that change could only come from the top down.

"And why not? He ran among the highest intellectual and political circles in the country where everything was discuss first, act later.

"But this was completely at odds with what we had learnt... that people power was the only real driver of change. Kader's thinking was entirely at odds with the whole movement we had started, a grassroots movement.

"This movement was not led by affluent men, well-educated lecturers or powerful politicians, the type of groups Kader would have wanted to endorse the strike; instead it was led by us, a predominantly female group of working class citizens, supported largely by the general working class public, left-wing politicians and a South African freedom fighter.

"What made our movement so inspiring to some were the exact same reasons that caused embarrassment for Kader Asmal."

The strikers had to fight against the weight of the whole Irish establishment, including the Catholic church. Some moving chapters discuss how the reactionary policies pushed through establishment politicians by the church impacted the lives of Irish women, including Manning's mother.

Manning makes a point of saying she has never joined a political party. But she does draw out many of the same lessons Marxists would from this struggle, and for that reason this book is well worth reading.