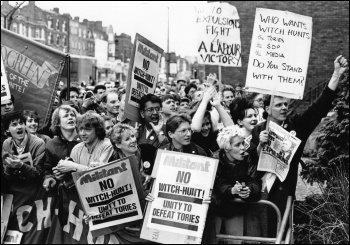 "Conference, we are in Liverpool where over 30 years ago the council stood up to Thatcher and said: better to break the law than break the poor."

It's no surprise that shadow equalities minister Dawn Butler provoked such scandal and contempt from capitalist establishment politicians and the media when she pointed to the Liverpool City Council of 1983-87 as an example of how Labour councils should be acting today. The council was led by supporters of Militant, the Socialist Party's predecessor.

An attack on the Militant-led Liverpool City Council has so often been the go-to line for many careerist Blairites - a way to burnish their credentials as opponents of any alternative to the politics of big business.

Ed Miliband used his first speech as Labour leader to denounce the council struggle. And, ever since the election of Jeremy Corbyn, scare stories and lies are shuffled out every few days in an attempt to dent and discredit the growing support for socialist ideas.

The victory of Liverpool City Council against Thatcher was historic. Its achievements included winning back over £60 million worth of funding for the city, building 5,000 council homes, opening six new sports centres, creating over 2,000 jobs, and refusing to carry out the £10 million worth of cuts demanded by the Tories. The struggle it led remains an inspiration. It shows what councils can and should do to take on Tory austerity now.

It is a disgrace that the overwhelming majority of Labour councils and councillors today prefer to spend more time attacking the legacy of this struggle than they do fighting Tory austerity!

Even the usually Blairite-dominated New Statesman magazine, no friend to the Socialist Party, carried an article which conceded, amid the widespread media condemnation of Butler's speech, that she had a point...

"Militant offered hope to those in need... Thousands took to the streets in support of the Militant-controlled council's resistance to an unsympathetic Conservative central government.

"Has there ever been any other occasion when 50,000 people marched in support of a local council? Local election turnouts, previously pitiful, soared. Labour's vote rose by nearly 70% between 1982 and 1984."

Today, Blairite councillors dutifully implement devastating cuts all over the country, including in Liverpool. These austerity-mongers should have no place in the Labour Party. Corbyn should be mobilising his supporters to kick them out.

He should be calling for all Labour councillors to take the 'Liverpool Road' - to set no-cuts budgets, which in most cases could be done legally, and to build a mass campaign to demand the funds needed and kick the Tories out.

Corbyn should pledge to underwrite this approach by committing to restore funds on day one of a Labour government to any council which takes such a road.

The Socialist Party, which stands in the tradition of the Liverpool struggle, and which still counts members of the heroic 'Liverpool 47' councillors among its ranks, should also be readmitted to the party on the basis of a renewed, democratic federal structure.

If you agreed with Dawn Butler when she said "it's better to break the law than break the poor", and if you want to be part of the struggle to fundamentally change society, join us.