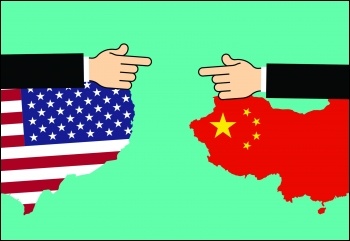 On 24 September, a further tranche of US tariffs on $200 billion of imported Chinese goods - nearly 6,000 products - was imposed by the Trump administration. The Chinese regime of President Xi Jinping retaliated by levying tariffs on $60 billion worth of US exports to China, but at lower rates (5-10%) than had been anticipated.

Starting at 10%, the new US duties will rise to 25% in January 2019. Further tariffs on $267 billion worth of Chinese imports, threatened in the New Year, would mean virtually all of China's exports to the US would be affected.

Both sides are engaging in brinkmanship to secure a trade deal, but it's uncertain when and what would be agreed. A lasting trade war, with all its domestic and international implications, could ensue.

The trade war between Washington and Beijing looks set to escalate. Trump's claim that trade wars are "easy to win" was mocked by Financial Times columnist Gideon Rachman, who compared this to the wildly inaccurate claims of the British ruling class in August 1914 that World War One would 'all be over by Christmas'.

Sections of the US capitalist class, their Chinese and global counterparts, are holding their breath to see if the conflict can be contained or escalates with potentially grave implications for the world economy, which is already experiencing turbulence especially in 'emerging markets'.

Washington's mixed signals are illustrated by the recent proposal from Trump's treasury secretary Steven Mnuchin for a new round of trade talks with China. This glimmer of hope briefly lifted the gloom on Asian and other stock markets in early September. But Trump quickly disassociated himself from Mnuchin's move, tweeting he was under "no pressure to make a deal".

Previous talks have proved abortive, despite the Chinese side initially offering significant concessions. The result is increased wariness on the part of Xi's regime fearing that the US side will just keep moving the goalposts if Beijing offers bigger concessions.

The instability and siege mentality of the Trump administration further complicates matters - as it faces 'Russiagate' investigations and numerous other domestic crises, and with opinion polls predicting a Democratic 'blue wave' that could wipe out Republican control of Congress in the November elections. But the roots of today's trade and economic disputes go much deeper than this, to the fundamental inability of global capitalism to take society and the economy forward.

The more Trump's trade agenda rolls out, the clearer it has become that China is the main target. His administration reached deals with the EU in July and Mexico in August, both of which increase the pressure on Beijing.

It's also clear that this conflict is only partly about trade and is in fact driven by bigger geopolitical and strategic issues. US imperialism is seeking to defend its position as the preeminent world power against its strongest international rival.

As one Chinese fund manager told The Economist magazine: "The Americans don't want a deal. They want to screw us."

Having initially gone into battle over the huge trade imbalance between the US and China, Trump's spokesmen have shifted the focus to technology and Beijing's 'Made in China 2025' industrial modernisation plan.

The US and its hungry multinationals, which want to prize open China's protected state sector, complain that the Chinese approach amounts to "cheating". Xi, while prepared to offer concessions, will never compromise over this issue which is central to the regime maintaining its dictatorial rule.

Trump has claimed his tariffs are working "big time" against China. But this is a mixture of bravado, showing toughness in order to shore up his domestic position, and the president's poor understanding of the subject.

In fact, the US trade deficit with China and worldwide has actually risen since his first batch of tariffs were introduced in July. The rise in the dollar, a byproduct of Trump's policies, is the main reason for this because it has made foreign goods cheaper.

Capitalist commentators are increasingly alarmed about the potential impact of a full-blown trade war between the world's two most important economies, which together account for 40% of global GDP (total output) and 53% of global growth. This could ultimately tip the world economy into recession.

At the same time, as a South China Morning Post editorial recently stated, the policies implemented globally to 'solve' the last crisis have resulted in "the greatest wealth transfer in history from the have-nots and have-littles".

Trump's policies, despite his populist rhetoric, only reinforce this process while injecting much greater instability into US and world politics.

Rather than target these companies for retaliation, Beijing is trying to woo them with concessions. It is not accidental that no anti-US protests or boycott calls have broken out in China, on similar lines to past protests - largely stage managed by the authorities - against Japan, South Korea and the Philippines.

None of Beijing's options for retaliation are pain free. That, of course, is implicit in any tit-for-tat conflict. Xi's regime does not want to widen the conflict, in so far as it can decide this, and has therefore taken only minimal countermeasures while at the same time muzzling its own media to prevent overly nationalistic and belligerent outbursts.

This reflects deep concerns within China's ruling elite over the vulnerable state of the economy. These problems predate Trump and his 'America First' policies, but the trade war could now make things a lot worse.

China's stock market slump - shares have fallen 25% since January - is one symptom of mounting economic problems.

China's debt-driven growth model is losing speed. Discontent is rising as social inequality reaches alarming levels. The government is caught on the horns of a dilemma - to continue its crackdown on debt (to avoid a financial crisis) or revert to debt-financed stimulus (to avoid a sharp slowdown or recession).

Its response to the trade war is therefore to try to keep a lid on things and tread a precarious balance in the hope of not 'provoking' Trump further while also not appearing weak.

The longer a trade war drags on the higher the risk that companies - foreign and Chinese - will relocate to other countries outside the trade war. This is a process that was already underway. South Korea's Samsung, for example, has already announced a cut in smartphone output in China, shifting some production lines to India and Vietnam.

Most commentators seem to have concluded the trade war is going Trump's way, but this is short-sighted in the extreme. Both the US and China will lose from this standoff, and unfortunately the working class in both countries will pay the biggest price through business closures, lost jobs and inflation.

Socialists don't support capitalist 'free trade' which is a false label, hiding the exploitation of poorer economies by the most powerful ones. Neither do we support capitalist protectionism, which aims to defend the profits of one set of capitalists against another.

One exemption to the president's latest round of tariffs on Chinese imports to the USA is smart watches. After the mega, tax-dodging corporations Apple and Dell complained to the White House administration, Trump responded by tweeting that Apple, instead of complaining, should relocate its production to the USA. But it seems the author of 'Art of the Deal' settled for a poor second. A case of big money talking even bigger than big mouth.