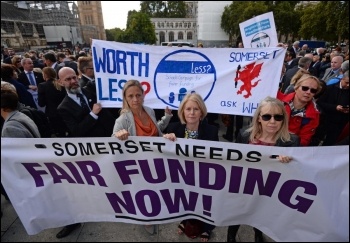 A thousand head teachers marched on Downing Street on 28 September demanding the Tory government give them the money they need to stop the onslaught on jobs, pay and funding that is destroying our children's education.

Despite this, many of the head teachers felt, that the demo was "not political" - a line they had clearly been given in advance by the organisers. This was no doubt in the vain hope they can plead to the 'better nature' of the Tories. In some areas Tory councillors themselves are demanding more funding for schools.

The reality is that teachers are not allowed to take time off in the school term unless they are granted 'special leave'. This was effectively unofficial strike action sanctioned by the governing bodies.

The make-up of the demonstration was unusual. As one journalist said to me: "It isn't your usual crowd, is it?" It's true this was certainly no dress-down Friday. There were more suits on show than a Savile Row shopfront window. As it turns out, the heads were told to dress 'respectfully'.

The union presence at the demo was very low-key, mainly because their union, the National Association of Head Teachers, had only tail-ended this upsurge from below. The protest was called by the grassroots campaign 'WorthLess' that started in Tory areas such as West Sussex on the basis that the inner cities were getting more funding per child than their areas.

But this has now evolved into a wider call for decent funding for all. The campaign is demanding an 8% increase in schools funding.

Despite all the talk of it being 'non-political', the fact that 1,000 head teachers took this action shows the level of anger and desperation that exists in the schools.

If, as is rumoured, that the largest teaching union - the National Education Union - calls a national consultative strike ballot over school funding, and not just the pay claim, then they should also put the call out to the head teachers' unions and all the support staff unions to join with them.

Head teachers are starting to take up the methods of struggle of the workers' movement. Marches like this could be demanding the end of the Tory government in the future. As one head whispered to me as she marched past me holding the Socialist newspaper: "I am really glad you're here".