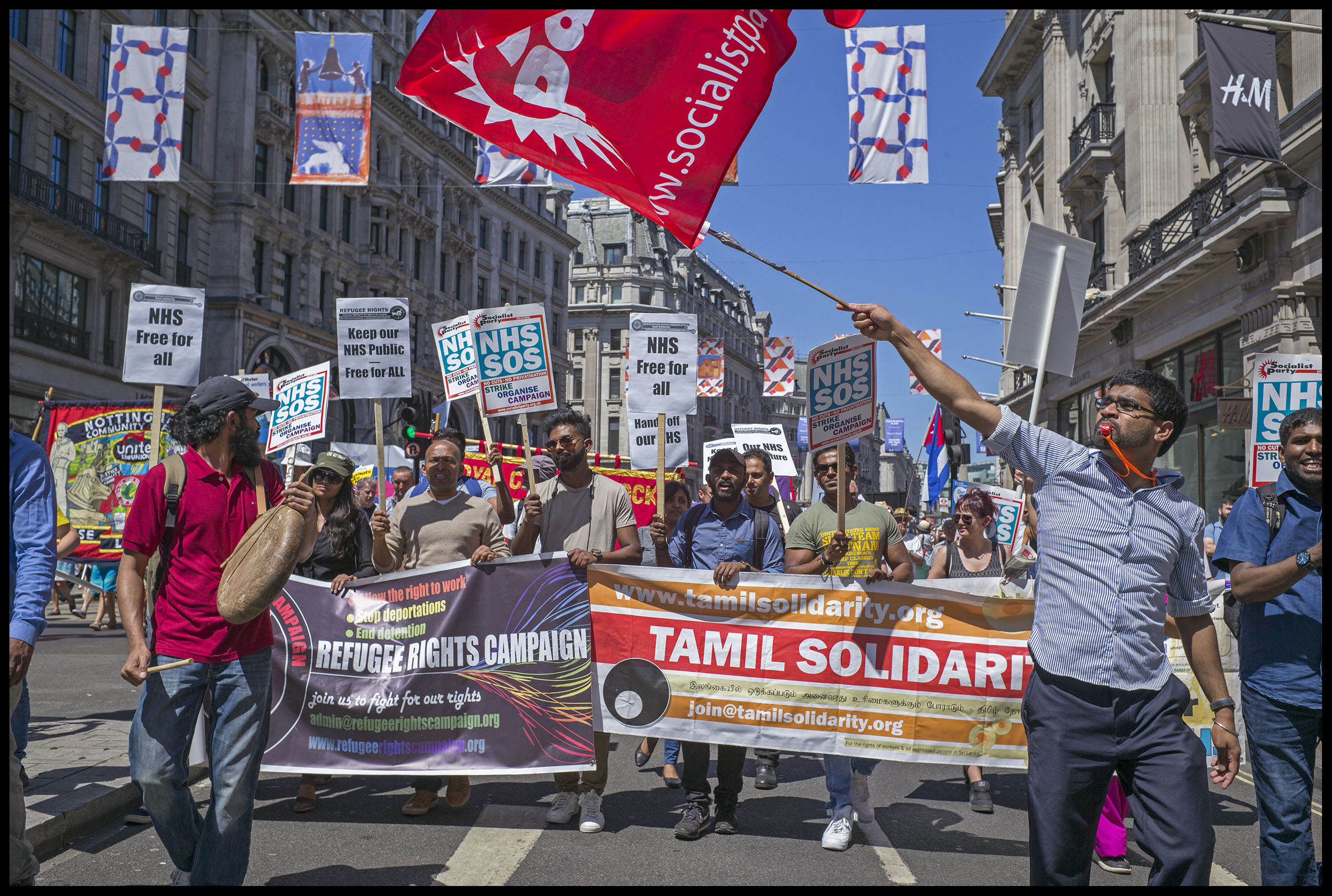 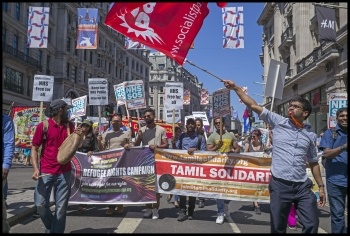 The unprecedented refugee crisis continues to affect millions of innocent people across the globe. On average, one person is displaced every two seconds. At the end of 2017, there was a record figure of 68.5 million people displaced across the world. Of these 25.4 million were refugees who were forced to flee their countries to escape war, conflict and persecution. This is 2.9 million more than the previous year and the biggest increase ever recorded by the UN human rights council.

People become refugees as a result of the effects of the capitalist system – a system based on exploitation and inequality. Right-wing governments’ imperialist foreign policies continue to stir war and conflict which fuel the refugee crisis. The same governments then treat refugees as criminals, putting us in detention centres and scapegoating us for the lack of decent jobs, homes or services – which really result from their austerity policies.

The question of how to solve the refugee crisis is hotly debated and is a source of tense inter-imperialist relations within the EU. In war-ravaged Syria, the attack by the Assad regime on opposition-held areas is likely to further increase this humanitarian crisis in Europe. More than a million have already fled as a result of the conflict.

When the EU’s European Commission met in September, far from discussing how it might assist those fleeing such horror, the agenda was instead focussed on fresh measures designed to stop refugees entering Europe. These measures included the creation of a special force of European ‘border guards’, which it said would number 10,000 by 2020. These armed border forces would have extensive powers to detain migrants and deport asylum seekers.

But no amount of border guards is going to prevent desperate individuals trying to reach safety.

It’s vital to fight for the rights of the refugees. The Socialist Party supports the Refugee Rights campaign, which is organised by refugees demanding better living conditions. It’s a campaign that links our plight to the struggles of the working class in Britain. The campaign’s demands include the right to work for all asylum seekers, full funding for the NHS, a £10-an-hour minimum wage for every worker, and free education for all.

The idea to launch Refugee Rights first came from a Tamil refugee after his experience of being held in a detention centre. It was initiated by the Tamil Solidarity campaign, which fights for the rights of all workers and oppressed people in Sri Lanka.

Detention centres treat victims in an awful, inhumane way. In the UK, undocumented immigrants can be detained at any time. Britain is the only country in Europe without a statutory time limit for the length of time that an individual can spend in detention. This increases the already huge uncertainty and mental pressure felt by those detained. The feeling of not knowing what’s next is itself a form of mental torture.

Britain has ten detention centres, two of which are ‘short-term’ holding facilities.

One is run by Her Majesty’s Prison Service, but the rest are contracted out to private companies like G4S, Mitie, Serco, and the US-owned GEO group. The Home Office is paying hundreds of millions of pounds to these private companies, which make substantial profits from imprisoning innocent people.

Detainees are encouraged to work for £1 an hour – essentially slave labour. Meanwhile, the value of the contract awarded to Mitie to run the Harmondsworth and Colnbrook detention centre was worth £240 million. The contract to run Brook House, which was awarded to G4S, was valued at £90.4 million.

According to the Home Office, in 2017 over 27,000 individuals were held in detention centres, out of which over 12,000 were forcibly deported.

The Guardian newspaper has undertaken a series of surveys to find out about life inside detention centres – which are at the heart of Theresa May’s ‘hostile environment’ policy.

The surveys found that many are left traumatised by their time in detention and have to pick up the pieces after periods of separation from children, friends and the community. Some of those detained are torture victims. Many are at a high risk of suicide.

Reports also suggest that these detention centres are even worse places to be locked up than prison. Many face depression and isolation. Most feel like their lives are left in a limbo. Some have been locked in their cell for as long as 13 hours. The vast majority are not told how long they will be held for or when they will be deported. Less than a quarter of those held have access to legal representation.

Outside detention centres, asylum seekers in the UK are refused the right to work and are forced to live on £5.39 a day.

A key demand of the Refugee Rights campaign is for the right to work for all asylum seekers.

History shows that no gains are ever just handed to us. Instead, they are won by working-class people demanding and fighting for change. Our campaign is led by refugees. But we believe it is necessary to build a united struggle of all working-class people, both to fight for the rights of refugees and asylum seekers and to win decent wages, conditions, housing and services for all.

That’s why we are proud to have won the support of the general union Unite, which represents over a million workers. After delegates voted to back the campaign at the union’s recent conference, Unite nationally is encouraging local branches to formally affiliate to Refugee Rights.

No solution to the refugee crisis is possible under capitalism. Enormous wealth exists within society – more than enough to fully provide for the needs of all people, wherever they come from in the world. The problem is that this wealth is overwhelmingly concentrated in the hands of a tiny few. And it’s this tiny few – the capitalist class – who profit from the exploits of war, poverty and imperialism which all too often drive people to flee their homes.

The only permanent solution to the refugee crisis is a fundamental change in society. We need to fight for a socialist society, both in Britain and internationally, in which people can safely live and work wherever they want and in which everyone’s needs are met.

Life as an asylum seeker in Britain

After fleeing the war in Sri Lanka, I first applied for asylum in the UK in 2007. I am still waiting for my case to be resolved.

I have been allowed to work in this country while awaiting the outcome of my application, but this is not normal for people who are asking for asylum in Britain.

I hold a degree in computer science and I work full time in retail. I’ve applied for many IT jobs and have had many interviews. But I’ve always been turned down due to my residency situation. The time taken to process my asylum case has destroyed the possibility of using my degree.

I have had many relationships but have struggled to find stability because of the ongoing uncertainty about my residency status. Some people feel they don’t want to commit to a relationship with someone who might be forced to leave the country.

This is heartbreaking to me and people like me. I have now found a partner who is able to accept me despite my situation. We recently tried to move in together and paid paperwork fees to an estate agent, only to be refused a flat because of my immigration status.

This whole system puts people like me under serious stress. Even though I am one of the ‘lucky ones’ who is able to work and pay tax, I am not eligible to rent property. I was eventually able to rent through my partner’s brother.

I have spent over £30,000 fighting for my right to asylum against attempts to deport me to a country where I would be in danger. This is because, as I am entitled to work, I am not entitled to legal aid.

I have been unable to live a normal life for more than eleven years. In this time, I have never been allowed to visit any other country for a holiday, for example.

The immigration system isolates asylum seekers for years and destroys our lives. Justice delayed is justice denied. That’s why I support the Refugee Rights campaign and Tamil Solidarity and am proud to be part of the fight for an end to these vicious policies.

Misery for asylum seekers… Golden visas for the rich!

Refugees, including those from countries in Africa and the Middle East, flee war, persecution and crushing poverty to seek sanctuary in Europe. In doing so, they risk imprisonment, enslavement and even death.

Having paid thousands of dollars to people smugglers, many face the peril of crossing the Mediterranean in overloaded and unseaworthy vessels. More than 34,000 have died attempting this route – all because there is no legal means to obtain refuge.

But for those rich enough, gaining residency or citizenship in Europe is not a problem. Fast-track ‘citizenship by investment programmes’ aka ‘golden passports’ or ‘golden visas’, are offered by virtually every government in Europe. This includes the xenophobic Orban regime in Hungary, which constructed a razor wire-topped fence along its southern border to stop migrants entering.

Such schemes are also available in the US. In fact, Jared Kushner, one of Trump’s senior advisers, is currently under investigation for alleged misuse of the ‘golden visa’ programme. It’s ironic given the White House administration’s threat to deploy the army to prevent a caravan of desperately poor Honduran migrants from entering the country.

Here in Britain it’s ‘open doors’ for super-rich oligarchs from China, Russia and elsewhere to enter the UK. This is despite the Tories’ notorious ‘hostile environment’ policy, with all its devastating human consequences including on the Windrush generation.

To give just one example, this recently allowed Madiyar Ablyazov, the son of Kazakhstan fugitive embezzler Mukhtar Ablyazov, to obtain UK citizenship using his father’s ill-gotten gains – with no questions asked!