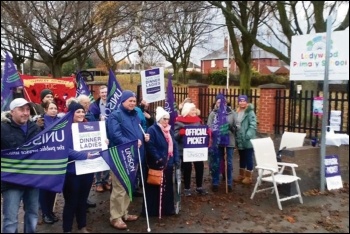 Dinner ladies and teaching assistants at Ladywood primary school in Grimethorpe, near Barnsley, took their 29th day of strike action on 19 November. The Unison union members are again on indefinite strike against the head teacher's proposals to make redundancies and cut hours.

Unison had suspended the strike for a week to allow talks, but the head's new proposals involve even bigger cuts than before!

The strikers retain the overwhelming support of parents and the local community. This was demonstrated when Radio Sheffield interviewed parents waiting to collect their children. Everyone backed the dinner ladies.

To his credit, one Labour councillor, Malcolm Clements, has been on the picket line. But the Labour council initially backed the head and says there is nothing it can do because of the Education Reform Act which handed control of management of schools to head teachers.

But the strikers and supporters will make the councillors listen when they march and lobby the council meeting on 29 November at 9.30am at Barnsley Town Hall.