Editorial of the Socialist issue 1020 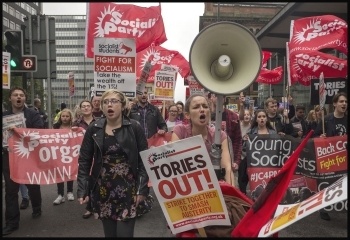 On 11 December, after a five-day House of Commons debate, Theresa May's Brexit deal will be put to a parliamentary vote. Among the multitude of divisions and rows, what all sides can agree on is that it seems unlikely the vote will go her way. This presents a huge opportunity for our side - workers, trade unionists, young people, all who oppose austerity - to strike a final blow against May's hated Tory government.

The Tory Brexiteers oppose the deal because it's not 'hard' enough. But it's not only the right wing who will feel this deal is a no-Brexit Brexit. Many workers will recognise that it comes as close as the government dares to reversing the anti-establishment vote to leave the neoliberal EU in 2016.

The deal commits Britain to a 'dynamic alignment' with the EU on things like state aid rules - which place obstacles in the way of nationalisation. The 'backstop agreement' for Northern Ireland means that the whole UK will remain in the Customs Union if no alternative to a hard border on the island of Ireland is developed during the transition period. What's more, there's precious little actually agreed about the long-term arrangement, only the transition period is really covered.

As the Socialist has pointed out many times, the majority of the capitalist class was against leaving the EU and has continued campaigning for a result as close to Remain as possible. It says it all that in the main they are in favour of May's deal. The Confederation of British Industry, TheCityUK (lobbyists for finance bosses), the Institute of Directors, and the British Retail Consortium have all backed the deal - many specifying that it's the best possibility and that the priority is to avoid crashing out with no deal. 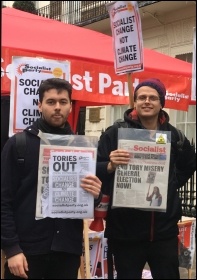 Capitalist politicians can also see the danger. While European Commission president Juncker called it a "sad day", the leaders of the EU 27 countries officially endorsed the deal - again recognising that this is the best option they have any chance of getting.

If, as seems likely, May is defeated on 11 December, what are her options? She will almost certainly try again - the deal can be put to the vote a second time a few weeks later. It's possible that in the interim some pro-capitalist politicians may be convinced to get on board. This could include the right-wing in Labour. Currently they are mainly opposing the deal, but if they backtrack and vote to save May, Jeremy Corbyn must immediately withdraw the whip from them.

Some still hope for a second referendum. But this seems an unlikely, high-risk strategy for May. The problem, as the Tories found in 2016, is that people often don't vote the way capitalist politicians tell them to!

Labour's shadow Brexit secretary, Blairite Kier Starmer, has raised the possibility of extending Article 50 - delaying the deadline for an agreement to be reached. This is an outrageous attempt to give May's crumbling government time to stabilise, and highlights yet again why Corbyn needs to take the reins on this issue rather than allowing pro-capitalists like Starmer to set the tone of Labour's approach.

The Brexiteer wing of the Tories may still attempt a leadership challenge against May. But this won't resolve the problem. Who would the candidate be? What deal would they negotiate that could win more votes from across parliament than May's?

The reality is that the reason any deal is likely to fall is because the capitalist class - and their representatives in parliament - are simply so divided that they are at stalemate. The Tories are wading through mud to move forward with Brexit, and may very well fail. Neither can they proceed with any other significant policy. For the capitalist class that they are supposed to represent, they are useless.

This crisis of political representation for the capitalist class is an international phenomena. The world economic crisis has undermined the authority and base of support for all capitalist parties. Just look at the anti-austerity upsurge against President Macron in France - exposing that the supposedly all-powerful EU 27 are facing their own crises and instabilities too. If Corbyn fought for a Brexit whose 'red lines' were workers' rights, it would have enormous appeal to workers across Europe.

So if May's government is so unable to give the capitalist class what they want, why do they continue to back it? Boris Johnson gave away the answer when addressing the conference of the Democratic Unionist Party. He said: "It is thanks to the arrangement between our two parties that we were able to stop [Jeremy Corbyn] taking over, and today we are looking at a country that is benefiting from a sensible, moderate and One Nation Conservative government... I hope you agree that it is absolutely vital that we keep this partnership going and that we are not so complacent as to abandon the government of this country to a man whose avowed policy is to break up this country."

Pro-capitalist politicians are becoming clearer that one of their main priorities is to avoid a Corbyn-led government coming to power precisely because that prospect is potentially closer than it has ever been. The opportunity in front of Corbyn and his supporters cannot be underestimated.

But as yet this opportunity has not been seized. Theresa May has announced plans to send ministers around the country to sell her deal to the public. Where are the plans for mass Labour rallies opposing it and explaining a pro-worker Brexit alternative? Instead the space has been left for the far-right leader Tommy Robinson to call a protest against the 'Brexit betrayal'. If Corbyn doesn't step up, forces like these can misdirect anger at the Tories towards racism and division.

A general election is inherent within the current political situation. But it is far from guaranteed. May - or even the Tories under another leader - could continue to press ahead whatever happens on 11 December if there is no push from below forcing their hand. Corbyn's Labour and the trade union movement have to take a lead.

Corbyn has rightly accepted May's challenge of a TV debate over the deal, but the important question is what he will argue. He could point to recent workers' actions like the strikes by shipbuilders at Cammell Laird in Merseyside against planned sackings and should argue for nationalisation to save the jobs. This is an opportunity for Corbyn to add meat to the bones of his proposal for a Brexit in the interest of workers and their jobs, conditions, pay and services. Masses of workers could be mobilised around this type of programme and would have the strength to kick out this rotten Tory government.