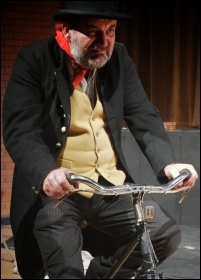 On a cold November evening, myself and other Newcastle Socialist Party members went along to see The Ragged-Trousered Philanthropists. To say it was wonderful is an understatement.

Actor and adapter Neil Gore commanded the stage from the beginning, regaling us with Edwardian songs that would have been music-hall favourites. It seemed appropriate as we were actually in the beautiful Wallsend War Memorial Hall, built around the very time that Robert Tressell wrote his socialist masterpiece.

There was 'Old Misery', 'Slyme', and of course 'Crass' - characters that workers will instantly recognise from the workplace.

As the play progressed, and with an array of props including myself and my cap, it became obvious to us why this play is doing the rounds. It is not only a classic, but it completely reflects the jobbing nature of the precarious work market today - this was the precursor to today's zero-hour gig economy.

One thing that did strike me was the amount of young people in the audience. In conversations with some of them, they told me they did not see this play as some distant memory - but as happening now.

One young man said he is on a zero-hour contract and could not afford to rent in Wallsend, one of the most affordable places in the country. In light of this, I asked if he had any info on our campaigns around rent control and brutal working practices by employers. He went away with quite a lot of information.

Socialist theatre company Townsend Productions is taking the play on a national tour at the moment, and I would urge all socialists to go and see it. Not only for its artistic merit, but also the very powerful and timely message.

By clever use of old-fashioned slideshows, music hall sing-a-longs, atmospheric lighting, shadow puppetry, audience participation, and the extraordinary talent and storytelling skills of a solitary actor, this fantastic production does indeed hold true and successfully tell the story of The Ragged-Trousered Philanthropists.

It's the latest stage production from socialist theatre company Townsend Productions. Their previous work includes 'Dare Devil Rides to Jarama' about the Spanish civil war, and 'We Are the Lions, Mr Manager' which tells the story of the Grunwick strikers.

I knew beforehand that this production was a one-man show. I was intrigued to discover the theatrical tricks and illusions he would use to tell this story.

Having read the book - many years ago - I understood that much of it is played out within group discussions between the painters and decorators, between the gaffer and the workmen, working on the big house on the hill.

Satirical names are given to the bosses to expose their meanness of spirit and general weakness of character. So we have a Mr Crass, the site foreman; Mr Hunter, the works foreman; and the town's capitalist mayor, who owns the big house on the hill the men are decorating, is a Mr Sweater.

Socialist Party member Neil Gore's version is unusual in devoting good time to the outlook of characters beyond the autobiographical figure of Frank Owen.

What struck me was how the conditions faced by the working class in 1911 seemed so similar to those we face today. The swallowing up of wages by the extortionate cost of rents, the 'race to the bottom' in wages. The exploitation of young or desperate workers, and the alienation of workers from their work as the boss cares little for any creativity involved in the job. The general meanness of their lives as a result.

This production successfully recreates the fear that accompanies loss of employment in the absence of a welfare state to save you. The novel was first published six years before the Russian revolution, an event which would give all workers struggling against their immediate conditions an alternative system and something to fight for.

Neil Gore's excellent adaptation charts some of the conditions which led to such an event. Well worth a look if this production comes to your town.

At 'Red' Mary Jackson's Doncaster memorial service in February 2018, it was mentioned that she had been inspired by Robert Tressell's epic, 'The Ragged-Trousered Philanthropists'.

In turn, I was inspired to buy it, but having to work on a zero-hours, minimum-wage contract to pay my absurd university costs has seriously curtailed my reading time. The news that someone was putting on a play of the book was very welcome!

That someone is Neil Gore of Townsend Productions. I went with other Socialist Party members to see them perform last year's excellent 'We Are the Lions, Mr Manager', about the Grunwick strike.

This time, Neil was performing on his own. But there was audience participation, (red) flag-waving, sing-a-longs, and a genuine Edwardian magic-lantern show.

I certainly got the sense of the class struggle that Tressell wrote about. The Great Money Trick was a definite highlight of the play: Neil, as the socialist painter and decorator Frank Owen, illustrates how lazy capitalists exploit workers' labour, using audience members, some coins and some slices of bread.

This was the first time Neil had performed it to the general public, at Sheffield's Lantern Theatre. He operates the equipment and of course plays all the parts: it is a real one-man show.

Neil has done an excellent job of adapting this huge book into a very accessible play, full of humour, while putting across Tressell's important commentary on the inequalities of capitalist society, as true today as in Edwardian Britain.

The play is highly recommended, and is on tour until July 2019.