Editorial of the Socialist issue 1024

Welsh steel workers marching to save their jobs in 2016. EU and single market rules impede nationalisation and state aid to rescue jobs and industry, photo Scott Jones   (Click to enlarge)

Parliament reconvened after the Christmas break with no let-up in the government's crisis over the coming Brexit vote. Theresa May's deal with the EU is still opposed by most MPs, most members of the Tory party and most people across the entire country.

She has been desperately trying to create assurances that would enable the deal to scrape through and avoid "uncharted territory", as she called the alternative. But at the time of writing, that still looks unlikely. It would mean appeasing rebel Tory and DUP MPs by coming up with some seemingly impossible guarantee against an indefinite resort to the EU-insisted "backstop" regarding the Irish border.

Alternatively, she can hope that enough Labour MPs would abstain or vote for the deal. But most of the right-wing Labour MPs who have considered this still view it as too great a liability. This hasn't stopped May from continuing to apply pressure, for instance by saying: "MPs of every party will face the same question when the division bell rings. It is a question of profound significance for our democracy and for our constituents. The only way to both honour the result of the referendum and protect jobs and security is by backing the deal."

However, rescuing the Tory prime minister won't, at this stage, help the prime objectives of the pro-capitalist Blairite MPs, which are to undermine Jeremy Corbyn and to further their political careers. So a central drive of a section of them - backed up by parts of the capitalist media - has been a stepped-up onslaught on Corbyn's position of opposing a new EU referendum, a so-called "people's vote".

Highlighted in the Observer on 6 January was the idea of "Labour losing by a landslide in a general election if it does not oppose leaving the EU". This was a subheading on an article by journalist Peter Kellner, who reported on the "biggest Brexit survey yet" - a new YouGov poll of 25,000 people - in which a majority thought the UK should remain in the EU if faced with the alternatives of May's deal or no deal.

He raised the spectre of "electoral catastrophe... if Labour is seen to facilitate Brexit in any form, YouGov's results indicate that the party would be deserted by millions of Remain voters - without gaining any extra support from Leave voters".

The poll showed nothing of the sort. On the substantive question posed in the 2016 referendum of Remain or Leave, this new survey didn't reveal a massive gap between the two today: it showed 54% for remain and 46% for leave. Also, note the extent of unease towards the idea of a second vote, when the researchers asked whether a decision to hold a new Remain-Leave public vote would "begin to resolve public divisions in society": only 26% thought it would, with most of the rest believing it wouldn't, and others not knowing.

The prospect of a Corbyn-led government being elected can't be judged by the present poll gap between Remain and Leave - even taking into account that Labour voters favour Remain by a bigger margin - without bringing into the picture all the other issues which would come to the fore during an election campaign. Manifesto pledges to raise living standards for the many millions of people who are struggling to get by would be enormously attractive, as shown in the 2017 election, as long as Corbyn and those around him get the pledges out clearly and seem determined to deliver on them. 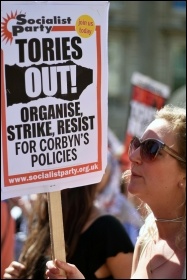 The other important issue is what views on Brexit would be revealed if polls like YouGov's included the question that they don't include? That is, on people's views on a Brexit that would not be based on the interests of British capitalism or on the ideas of racist right-wing Tories, but rather on workers' interests and on solidarity between working-class people across Europe.

Corbyn must stand firm on the lines he has drawn: rejecting the EU and the aspects of its treaties which, although they could be resisted by a mass movement backing up a Corbyn-led government, would be used to try to legally obstruct socialist measures. And as he has said, he will need to seek a customs union which would enable the continued flow of necessary goods - for people's needs and jobs.

Many capitalist commentators argue that Corbyn fears alienating Leave voters in working class areas if he backs Remain. This is in line with their belief that to obtain votes politicians must inevitably manoeuvre in an unprincipled way regarding their policies.

Without doubt many who voted leave in 2016 would be outraged if establishment-backed politicians succeed in getting a re-run of the referendum in an attempt to obtain a different result. This is certainly one of the reasons why it shouldn't be done. But, in addition, as the EU is essentially a bosses' club, in the context of a binary choice referendum, the right decision - to leave it - was made in the first place. A socialist opposition to the EU is a principled position.

The 'people's vote' that is urgently needed is a general election - so the Tories can be ousted and a Corbyn government brought in. Exactly what deal Corbyn's future negotiators could extract from the EU leaders can't be predicted in advance. In the above YouGov poll a large majority of people said they don't think it likely that Britain will get a good deal with the EU, no doubt reflecting recognition that all the capitalist governments are fighting for their own interests. Corbyn can, though, fight and negotiate in workers' interests, and those of workers across Europe, and in doing so set the best possible arena for workers' struggles against the austerity imposed by EU governments, and promote a socialist alternative.

As well as the Tory government being extremely weak, most governments across Europe are unstable and are facing economic slowdown and rising opposition. Angela Merkel announced two months ago that she won't be standing again as chancellor of Germany, following a series of bad election results for her party. President Macron in France has been forced down from his ivory tower by the sweeping 'gilets jaunes' (yellow vests) revolt and can no longer boast about his anti-working class policies.

"In moments of crisis the cost is secondary" Macron said to his parliamentary colleagues when explaining the suddenly urgent need for €10 billion worth of concessions to the protest movement.

Much more, including his removal from office, can be gained by the French trade unions - the organised working class - if they enter into mass struggle alongside the unorganised gilets jaunes. They can bring into play the strongest potential weapon against the government and bosses: a general strike.

Likewise in Britain, austerity can be countered and defeated through the mobilisation of the trade union movement with its millions of workers and the further millions who would support it. The anti-austerity demonstration on 12 January called by the People's Assembly will be limited in its impact without such a mobilisation.

Mass workers' action and demonstrations are needed, along with democratic debate and discussion - unfortunately not a feature of the People's Assembly at national level - to arm the struggle with the ideas and activities that can lead to success.

In 2013, when the People's Assembly was set up, Socialist Party members argued for it to oppose cuts-imposing budgets at local authority level as well as nationally; and to call for the building of coordinated national strike action against austerity. Neither of these vital tasks were accepted by the organisation's leaders, who wanted to keep on board so-called 'anti-cuts' councillors who have voted for cuts, and trade union leaders who have never agreed with spearheading coordinated trade union action to end austerity.

But the Socialist Party will be building for and participating in the 12 January demonstration, as will always be the case in all struggles, to make the socialist analysis and demands in our papers and leaflets available to all who take part, and to add our voice to the event's important call for a general election.