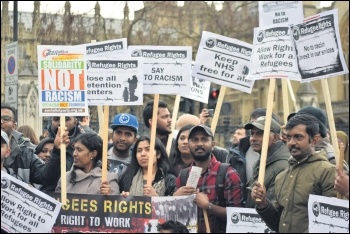 In March 2017, the 15 felt so outraged by the injustice being meted out to desperate migrants by the Home Office that they took direct action to stop a Stansted plane bound for Africa from taking off with 60 deportees.

Melanie Strickland, one of those convicted, said: “We knew people on that flight who were in fear of their lives. We took humanitarian action in peacefully stopping that plane to assist them.

“As a result, eleven people were able to secure legal representation and file legal papers to prevent their unlawful deportation. These people include trafficking survivors, parents of dependent children and those who seek asylum here.

“They are human beings and they did not deserve to be treated that way. We did what we could, because we know if we were in their position, we’d want people to act to assist us.”

Initially arrested under trespass laws, the charges were then inexplicably changed to charges under the terror-related Aviation and Maritime Act 1990, which carries harsh jail sentences, including life imprisonment.

Socialists say our fight is not only against unjust deportations. It’s also about the right to protest that is increasingly under threat.

Despite an avalanche of protest letters from all quarters, and masses of young people demonstrating their support, the Crown Prosecution Service has decided to proceed. Coaches bringing supporters to the court have been organised with the help of the local trade union and labour movement.